As The World Turns Fan Fiction: Holden And Lily’s Secret 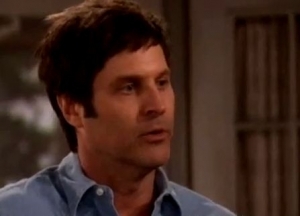 Our latest fan fiction piece gives us a chance to return to Oakdale and see what our favorite characters might be doing. This third installment looks at what might have happened between Lily and Holden. Jennifer showed up alive in the As The World Turns second fan fiction story. Her story continues here.

Alone at home, Lily hears someone entering the front door. She smiles when she sees it is Holden. He wonders if she is alone. Lily confirms that the kids are at the farm with Emma and Luke is doing work at the hospital. Holden adds that he is having dinner later with Luke to hear how his visit with Noah went. The two quietly pause staring at one another. “Enough small talk,” Holden says. The two come together for a passionate kiss. Lily fills Holden in on Lucinda’s questions about their relationship and feels like she might be up to something. Stroking Lily’s hair, Holden smiles as he says, “Maybe it is time we let everyone in on our little secret.” Lily worries that it might mess up what they have, but does agree they can only hold out for so long.

Lucinda chats on the phone with Luke as she walks through the halls of the Lakeview. “Darling, please tell me you are not getting back together with Noah.” Luke laughs on the other end of the phone and insists he isn’t ready to jump into another relationship while still grieving Reid. Lucinda wants to meet up with him to discuss her plan for Holden and Lily. Luke agrees to meet her later. Hanging up, she spots Lisa, Kim and Barbara having lunch and saunters up to their table. “Did my lunch invitation get lost in the mail,” she asks. Lisa stammers that it was a last minute meeting, but Kim diffuses the awkwardness by inviting Lucinda to join them. Lisa wonders what makeup Barbara and Lucinda are wearing, as they both look amazing. Lucinda laughs that it is the love of a good doctor and Barbara quips, “And a lot of afternoon delight.” The ladies giggle and Kim suggests that they should get together more often for lunch when she and Bob get back from their latest vacation.

Chris and Katie stroll Jacob into the diner and are happy to bump into Janet, Dusty and Lorenzo. Katie inquires how Liberty is doing at fashion school. Janet beams when she brags about how great Liberty is doing and knows she’ll be a big success. Katie believes Brad is looking down on his daughter with pride. As Chris and Dusty go to the counter to order, a jittery Janet pulls Katie aside. "We have to get together somewhere alone. I need to know everything there is to know about Jennifer." A surprised Katie wonders why Janet is so anxious about someone who is dead. Janet confesses she can’t shake this feeling that something out of the ordinary is happening. Katie makes plans to meet Janet later.

Craig and Rosanna return back to their Lakeview suite with Johnny. As Craig is saying good night to Johnny, he notices a picture of him as a baby with Jennifer on his nightstand. Craig doesn’t recall it being there before and asks Johnny if Dusty gave it to him. A puzzled Johnny doesn’t remember it ever being there, either. Craig tries to hide his worry and tucks Johnny into bed. Craig returns back to the living room and tells Rosanna something strange is going on. Rosanna thinks he just needs to relax and suggests they have a good bottle of wine and cuddle on the couch. Craig offers to go down to the Lakeview restaurant and pick up some dessert to go with their wine. Rosanna smiles. She is going to slip into something more luscious to go with dessert. As Craig exits his room, he is shocked to come face-to-face with Jennifer! He is speechless as she boldly tells him, "You are not dreaming, Craig, and you will help me get what I want."

What do you think Jennifer wants?

Take a moment to vote in our As The World Turns poll: Where has Jennifer been?.