Is ATWT’s Lily Really Over Holden? 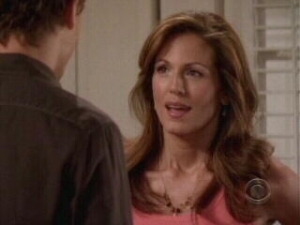 Their romance has been on-again, off-again for the past 20 years (or maybe a little bit longer) but As The World Turns’ Lily and Holden are still as big of fan favorites now as they were when they were teens. Now, though, it seems that the Lily/Holden romance has finally hit the skids – thanks to a bit of infidelity between Carly and Holden.

When Lily left town last winter to find herself after Dusty’s death, Holden had no one to talk to. He had no one to talk to since Jack was embroiled in his own drama with Katie and Brad; a relationship between Carly, who was also lost and lonely without Lily around, was bound to happen. For Carly, it seemed to happen faster. She latched on to Holden’s friendship as if it was an anchor. Holden, whose bit of a romance with Bonnie was over, latched on to her, too. Soon the two were inseparable but still fighting their feelings and trying to remain friends only. All of that changed one night at summer camp. Carly and Holden were thrown into the same bunk and their feelings came to a head. They made love but both regretted the decision.

That, of course, didn’t stop them from making love again when Holden, jealous over a friendship between Carly and Neal, followed her to New York. At this point, Holden realized how deceitful he was being and told Lily the truth. Enraged, she threw him out and has been trying to move on ever since.

Late last week, Lily made a move on Mike, who gently rebuffed her. He said he wanted to be her friend – and only her friend. Jealous Holden could stand the thought of even a friendship between them and asked Carly (of course!) to intervene. Carly went to Mike, since Lily won’t even look at her, and asked him what was going on. Mike insisted he was only friends with Lily and that they would only be friends.

This week, however, things are going to change – at least a little bit – for both Lily and Mike. Still trying to get over Holden and angry to learn that he has moved from the farm and into The Lakeview (Lily’s hotel of all places!), she turns to Mike. He has been thinking over their flirtation from last week and decides that friendship isn’t enough. However, Mike wants to go slow. Lily doesn’t want a slow and sweet romance and manages to seduce him; they make love.

Lily still isn't over Holden, though, and is still struggling with what she wants for her life. Holden has been bludgeoning her with the "stay together for the kids" argument and so has Emma. So, to some extent, has Luke! Lily isn't sure what to do but she knows one thing: she wants to be in love with her husband and she wants him to be in love with her. Staying together for the kids is not the kind of life Lily wants and she knows in her heart of hearts that it won't be good for any of the children.

The question is, should she stay with Holden, who can't make up his mind between Lily and Carly? Should she try to move on with Mike? Is Lily really over Holden? Can either of them ever be over the other with the history they have shared?

Some would say no. She will never be truly over Holden and he will never truly be over her. Can they come back from their past this time around? Whatever happens, it is sure to entail a lot of great daytime drama and we will enjoy the ride!

A Brief History of As The World...

Lil Wayne’s Kids: Everything To Know About His 4 Children

How ‘The Blacklist’ Moved On After Megan Boone’s Exit