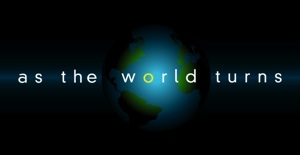 At this time in 2008, an Oakdale resident was found dead on the floor of the hospital. On first inspection it appeared the individual simply stopped breathing, but upon further review, it was revealed he was injected with something, leading the cops to assume he had been murdered.

The suspects in this case included Holden, Lily and Emily, since the deceased had wronged each of them in some way. However, it was later revealed that said murder victim was actually alive. The person faked his death so he could slip out of town, but unfortunately for him, James Stenbeck intervened and kidnapped him.

After also being taken captive by Stenbeck, Meg discovered the presumed dead alive and well, but locked in a cage. Who did she find?

What do you remember about Proteus on All My Children?

As The World Turns Flackback Friday...

As The World Turns' Jon Lindstrom In...