A Brief History of As The World Turns’ Andropoulos Family 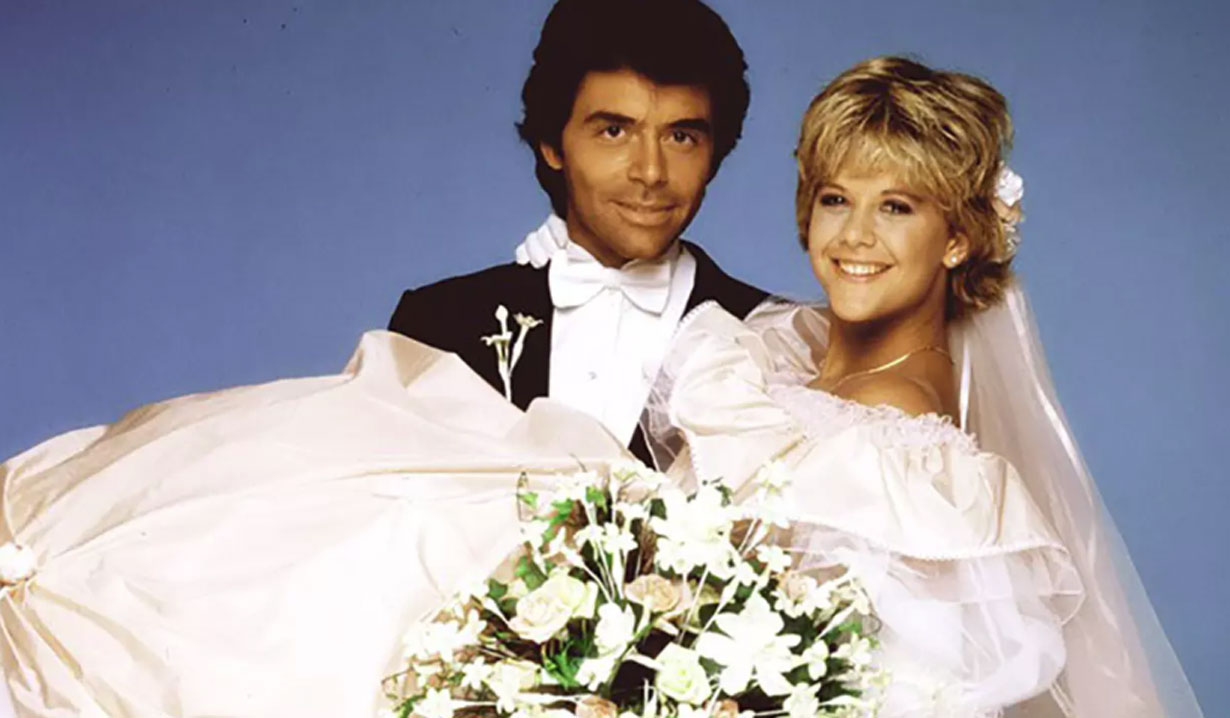 This week a core family returns to Oakdale, although only one member will be seen – at least for now! Throughout the early 1980’s, Steve Andropoulos, played by Frank Runyeon, and Betsy (Stewart) Andropoulos, played by Meg Ryan were one of the favorite couples in all of Oakdale. This week, their daughter, Dani, returns to the canvas as a forensic scientist. Dani will be played by Deirdre Skiles and will be directly involved in the investigation into who has been poisoning Oakdale residents.

Steve and Betsy fell in love in the 1980s and although they were meant to be together, their road to happiness wasn’t smooth sailing. Soon after they began seeing one another, Nick, believing that Steve was only after Betsy’s money, exacted a promise from her never to see him again. Nick died soon after. Because of her promise and because she couldn’t end her feelings for Steve, Betsy quickly married Craig Montgomery after he saved her from an explosion. Heartbroken, Steve watched the ceremony from the back of the church.

The marriage wasn’t a happy one for either Betsy or Craig, mostly due to his jealousy (Craig was also impotent). Betsy soon left town for Spain to figure out what she wanted from life. Steve learned of her trip, followed her to Spain and declared that he still loved her. They made love for the first time there. She was ready to leave Craig but when she returned home she couldn’t do it because he had planned a romantic evening for them. Betsy and Craig made love. She learned soon after that she was pregnant and, believing the child was Craig’s, recommitted herself to her marriage.

Meanwhile, Diana McCroll tried to move in on Steve because Betsy couldn’t make up her mind. Realizing that Betsy was still in love with the other man, Craig took every opportunity he could to remind Betsy of Steve’s new love.

Soon after this, Betsy found Steve, wounded, in the back of her car. He was suspected of stealing gold coins belonging to Whit McColl. Betsy decided to help him hide from the authorities and asked Tucker to help her figure out who framed Steve. David learned of their plans when he saw Betsy sneaking into Memorial Hospital for medicine. David looked over Steve and realized he was very ill; David enlisted Betsy’s help to operate in the boathouse. When he was recovered enough, Steve left town so that Betsy wouldn’t get into more trouble. He left a note for her; when she found it, Bets began having abdominal cramps. She recovered and the baby was okay.

Around this time, Craig began spending a lot of money with Diana. They were planning to build a nightclub and he was also building Betsy’s dream house. One of the coins was soon found and Betsy and Steven begin investigating the theft together. Steve, Betsy and Tucker tracked down the buyer of the first coin; Steven took a cruise with Vermeil while Betsy learned that Vermeil was a member of the mob. She convinced Craig that her doctors had advised her to take a cruise to relax but when she decided to cash in stocks to pay the fare, Craig panicked. He had lost all of Betsy’s money to bad investments. Though Betsy didn’t know this, she did realize she was still in love with Steve and decided to leave Craig.

Betsy went into labor at the boathouse after a romantic interlude with Steve. He managed to get her to Memorial Hospital but hid from authorities. Diana found him and advised him to leave but he couldn’t leave Bets alone. She delivered a baby girl and named her Danielle. Craig declared his love and asked for a second chance but Betsy told him it was over. He was fired from his job and one night, Betsy overheard him talking to the baby. She was touched by his words and decided she couldn’t leave him. She told Steve this and walked out when he became angry.

Kim advised Betsy not to leave things this way so she wrote Steve a letter explaining that she did still love him. Craig found the note and destroyed it. He sent a note which said Betsy was in love with him! Betsy went to see Steve but Diana was there, wearing one of his shirts. She was heartbroken and, unable to live with Craig, moved in with Kim. When she collected her things from her home, Craig faked a fall and pretended to be paralyzed so that Betsy wouldn't leave him. A winter storm blew in to Oakdale, weakening the boathouse. Craig knew Steve was going to work on the place and set a trap to kill him but instead Betsy was the one hurt. Steve saved her life but the boathouse was destroyed.

Craig tried to sell the property to Colonel Jameson, who promised Craig a lucrative job. Betsy didn't want to sell, though, and told Craig she was building a home for abandoned children there. Steve bid on the project but when Diana learned of this, she changed his plans for the site so that he would be certain to get the job. Betsy tried to save her marriage to Craig but couldn’t stop thinking of Steve.

She took a few of his things back to him but rather that ending their relationship, they two nearly made love. Betsy stopped things, saying she had to end things with Craig for good first. When she went to Craig, he accused her of having an affair and threatened to take Danielle from her; he hid the child buy Lyla intervened and helped Betsy find Danielle, who was at a friend's home. Diana went to Steve to tell him Craig was faking the paralysis. Steve tracked down Betsy and told her everything. She finally left Craig and reunited with Steve.

Very soon after that, the two learned that Besty's daughter was actually Steve's daughter and not Craig's! The two were married.

There were a few more hurdles, though. Betsy lost her memory in a horrific crash. Craig actually found her and helped her return to Oakdale. She and Steve tried to be happy but Betsy soon became almost obsessed with money. Steve tried to make her happy but actually put them drastically in debt. He left Betsy but she was still in love with him. She tracked him down but was too late - Steve was serving a life sentence (for drug charges) in a Greek jail. She filed for divorce.

Betsy tried to find happiness with Tad and Josh but both of those relationships were doomed. She and Dani moved to Wisconsin.

Although their romance was star-crossed and short-lived, fans have long been fans of Betsy and Steve. With the return of Dani, could that mean another shot at love is in the cards for her parents? We'll have to wait and see!

Is ATWT's Lily Really Over Holden?

Darren Aronofsky on ‘Mother!’ at El Gouna: ‘I Get the Best Hate Mail Ever’