As The World Turns Fan Fiction: Is Jennifer Alive? 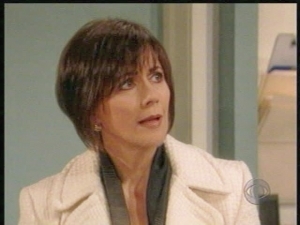 Revisiting Oakdale: The return of a lost love.

A shaken Craig arrives at the hospital to meet Jack and Carly’s new son, Hal. Trying to hide his anxiety over his recent run-in with Jennifer, he congratulates Jack and Carly. “He looks just like you Jack, so I guess no paternity tests will be needed this time,” Craig jokingly says. Mildly annoyed, Jack and Carly are too happy to fight back and brush off his comment. Rosanna immediately notices that he doesn’t seem like himself and privately asks him what is wrong. Craig whispers, “I think I’ve seen a ghost.”

Lily returns home from the hospital and thanks Lucinda for watching the kids in Luke’s absence. “Have you heard how Luke’s visit to see Noah is going,” Lucinda asks. Lily admits she is concerned Luke will fall back into a relationship with Noah, while still grieving Reid. She hopes Luke will return home single. As they chat, Lucinda is happy that Lily is open to repairing their damaged relationship. Noticing a change in Lucinda, Lily believes John has something to do with her happiness. “Yes, the doctor has provided me with the medicine I need. But darling, what about you? When are we going to get you and Holden officially back together?” Lily shakes her head, knowing her mother can’t help but resist an opportunity to meddle. Lily pleads, “I know you mean well, but let’s not go there. Holden and I are happy together, let’s just leave it at that.” Lucinda smiles slyly, while silently hatching a plan for the lovebirds.

Barbara and Henry canoodle on the couch in their Lakeview suite. Barbara insists she has to get ready for a lunch date with Kim and Lisa, but Henry asserts they can wait as he kisses her neck. After a passionate kiss, Henry finally relents and releases Barbara to get ready. Noticing her smile, Henry asks if she is thinking about their role play from the night before. Babs giggles, but reveals she was thinking about how she almost has it all. Henry doesn’t understand what they could possibly be missing. She quietly reminds him how much she misses Jennifer.

Janet and Dusty entertain Johnny and Lorenzo in their Lakeview suite. Johnny tells them he is hungry, and Dusty suggests a plate of Janet’s famous meatballs. While Janet steps away to the kitchen, Johnny asks Dusty if he loves Janet more than his mom. A surprised Dusty tells Johnny that Janet is very special. Janet returns to hear Dusty assure Johnny that he will always love Jennifer.

A red-haired woman watches Dusty, Janet, Johnny and Lorenzo laughing as a family through a window. She returns back to her own hotel room. Scattered around the room are pictures of Johnny, Dusty, Barbara, Hal, and Paul. The woman picks up a picture of Jennifer, Dusty and Johnny. After staring at the picture for a few minutes, she angrily throws the frame at a mirror. Trying to regain her composure, the woman looks at herself in the now broken mirror. Jennifer stares back and says, "It’s okay. You can still get your family back."