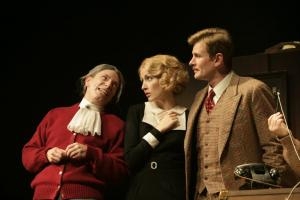 Soaps.com congratulates the cast and crew of the Broadway hit “The 39 Steps” – starring none other than As The World Turns’ Jennifer Ferrin (ex-Jennifer Donovan). The show was nominated for six Tony awards and won two of the awards!

That isn’t all the good news for the cast and crew. In addition to the Tony Award nominations and wins, the play won two Drama Desk awards. The show won the awards for Unique Theatrical Experience and Outstanding Lighting Design.

The play is an adaptation of John Buchanon’s spy thriller “The 39 Steps” but the play version was made into a comedy. Jennifer plays several different parts in the show. The plot follows a man who learns a little too much about a spy ring; Jennifer’s roles pop up throughout the show.

“The 39 Steps” has moved locations to the Cort Theatre and will run through August 31, 2008. If you’d like ticket information, please click here.

Soaps.com congratulates Jennifer, the cast and crew of “The 39 Steps”. Good luck as the show carries on!

Laurence Lau Comes to As The World Turns