Confirmed: Justine Cotsonas Out of As The World Turns! 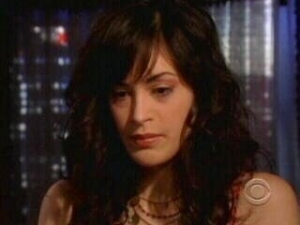 Soap newcomer Justine Cotsonas will be moving on from Oakdale in just a few weeks. Soaps.com has learned that Justine’s character, Sofie, will be murdered later this week, but we will continue to see Sofie on-screen through August.

Justine’s Sofie first arrived in Oakdale last fall; she immediately hit it off with Aaron Snyder. While working with him at The Lakeview Lounge, Aaron became a shoulder for Sofie to cry on when boyfriend Cole ignored her or put her down. It quickly became clear that Sofie was in a bad relationship and needed to cut ties but she was too emotionally attached to Cole to cut those apron strings. When she learned she was pregnant and he didn’t want the baby, it only made things worse.

Sofie considered abortion but couldn't go through with it and settled on adoption. However, when she learned that Cole, his mom Iris and Barbara Ryan were actually working together on a baby-buying scheme, Sofie backed out and decided she would keep her baby and raise her alone. This was heart-breaking for Will and Gwen, who believed they were legally adopting Sofie's child.

Once she was alone with the baby, Sofie realized she couldn't handle the pressures of being a single mom with no support system and did turn the child over to the Munson's, but quickly regretted that decision and became very attached to both Will and Gwen. When they tried to separate themselves - and the baby! - from her Sofie snapped and kidnapped the kiddo. Hallie nearly died before Sofie got her to a hospital. At that point, a judge ruled in favor of Will and Gwen keeping the child.

Sofie then turned to Paul Ryan, who offered a shoulder, and attached herself to him. Paul did take advantage of Sofie, using her to forget about Meg, but he has since told her that they have no future. Sofie isn't willing to give up, though, and has used Cole to help convince Paul that the child she is now carrying is his.

A little later this week, Sofie will be murdered. The question is, who will kill her?

Could it be Barbara? She told Sofie in no uncertain terms to stay away from Paul.

Could it be Meg? She is in love with Paul and desperate to get Sofie out of their lives?

Could it be Cole? He has shown violent tendencies in the past and wants Sofie to give him more and more money.

Could Sofie accidentally kill herself? She was behind Barbara's accidental overdose a few weeks ago so she certainly knows her way around drugs.

We'll have to wait and see exactly what happens with the character. What we know for sure is that Sofie is on the way out of Oakdale - and we'll miss her! Though many fans say the character is too over the top, I think she's great - every soap needs a certifiable crazy person, don't you think?

We will keep you up to date on Justine's last airdate as Sofie and we wish Justine the best of luck with her next acting gig!

As The World Turns Song Segments...

As The World Turns' Jon Prescott...