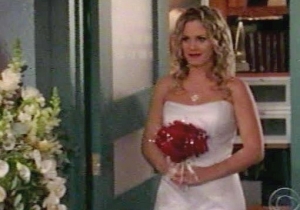 Daytime stars have some of the best fashion sense in the world, and now you can dress like them, too! We’ve had several emails from fans wondering which designers are dressing which stars and where the wardrobe department gets some of the clothes. I had the chance to chat with one of the As The World Turns’ wardrobe designers to get the scoop on Maura West (Carly), Terri Colombino (Katie) and Kelley Menighan Hensley (Emily).

Let’s begin with the dress worn by Emily on the May 9, 2008 episode. In the past, Emily has dressed in a very professional manner with business suits or even pant-suits, but in recent months, Emily’s style has begun to change.

Emily is wearing more dresses, some flirty fashions and even (gasp!) showing a little skin. What brought on the change? It all seemed to start when she returned to Oakdale last fall with Chris Hughes on her arm.

During this particular episode, Emily was working at the offices of The Intruder, wearing a stunning white dress. Now, while most of us wouldn't wear anything that fancy to work, it fit right in in soapland. The cap-sleeved, mid-thigh length white dress was designed by Cynthia Steffe of Lord & Taylor. It would be perfect for a night on the town!

Carly is always a fashion plate in Oakdale. And why shouldn't she be? She was once a designer herself! Now that Carly is starting over with her own nightclub, it makes sense that she would want to dress in a hip and trendy style. I call Carly's style "soccer mom chic". Fitted jeans, knit tops matched with blazers or flowing halters seem to be a few of her favorite things this spring.

For the character, the wardrobe department buys from five main stores. Theory, GAP, Ralph Lauren, Banana Republic and Tahari. If you'd like to try on Carly's style, head down to one of these stores and try mixing and matching!

Finally, Katie has been known to try on some very. . .hmmm, interesting fashions. But, for her recent televised wedding to hunk Brad Snyder, Katie decided on a traditional look. The strapless white gown was designed by 2 Be Brides and was purchased from Kleinfelds. For her hair, the hair and makeup designers chose a simple side upsweep with a few locks of hair to frame her face and simple veil which reached to her mid-back.

There you have it, fans, you are up to date with the latest fashion trends in Oakdale. Now, lets head to the mall to create our own Oakdale inspired looks for the summer!

As The World Turns Casting Rumors...