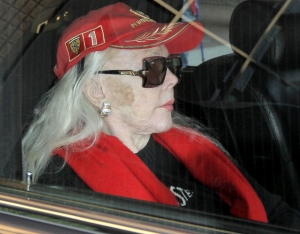 Back home and celebrating.

We are sad to report that the actress had to be rushed to the emergency room on Sunday morning. Zsa Zsa lost consciousness, had a high fever and experienced internal bleeding while in her Bel-Air home. An operation to reattach a loose tube in her stomach, which caused the bleeding, was planned. Though her condition is critical, her doctor expressed “guarded optimism,” as she was able to open her eyes and squeeze her husband’s hand.

Last Wednesday well-known actress Zsa Zsa Gabor, who played Lydia Marlowe on “As The World Turns” in 1981, was finally released from the hospital after breaking her hip back on July 17. Prince Frederic von Anhalt (Zsa Zsa’a 9th husband) told the Inquisitr that his wife was in good spirits and even flirted with a few of the guys who helped her home.

Some of Zsa Zsa’s earlier credits include “Matinee Theatre” as Eugenia/Mme Brillon, “G.E. True Theater” as Countess Gloria/Sari Sanine, “Gilligan’s Island” as Erika Tiffany Smith and “Bonanza” as Madame Marova. In later years she appeared on “The Fresh Prince of Bel-Air” as Sonya Lamor and in “The Naked Truth” as a stewardess.

This past weekend the couple celebrated Zsa Zsa having survived her 94th birthday and their 25th wedding anniversary combined.

To find out what's happening with another past Oakdale actor visit Trent Dawson's Off-Off Broadway Nomination.