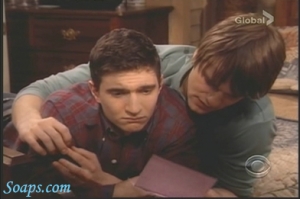 Traditionally a serious international political newspaper, the New York Times featured a story on May 15, 2008, about the gay teen super couple from As the World Turns, Luke Snyder, played by Van Hansis, and Noah, played by Jake Silberrman, or “Nuke”!

While the story covers the turmoil that the dynamic duo has faced, the main focus is how this storyline is saving As the World Turns’ ratings! While other soaps are losing viewers in the coveted 18 to 37 demographic, Luke and Noah’s story has helped the soap gain viewers.

With the help of viral videos, even popular gossip sites have featured the historic first kiss, as well as a continued discussion on the storyline itself. The dramatic storytelling of “Nuke’s” obstacles, are still what soaps fans tune in to watch.

Luke and Noah’s storyline continues to attract major news media coverage. While not the seasoned couple like Lily and Holden, their storyline is helping the world continue to turn for the veterans.

As The World Turns Wardrobe...