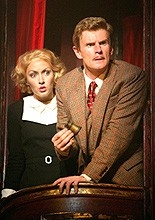 Huge congratulations today to Jennifer Ferrin, ex-Jennifer Donovan, As The World Turns, and the cast and crew of the play “The 39 Steps”. The play has been nominated for six Tony Awards!

The play is an adaptation of John Buchanon's spy thriller "The 39 Steps" but the play version was made into a comedy. Jennifer plays several different parts in the show. The plot follows a man who learns a little too much about a spy ring; Jennifer's roles pop up throughout the show.

"The 39 Steps" recently moved to the Cort Theatre and was renewed to run through August 31, 2008. Click here for ticket information.

The 62nd Annual Tony Awards will be presented June 15, 2008 at Radio City Music Hall in New York City. The awards will be televised live on CBS!

Congratulations Jennifer and the cast and crew of the show! Soaps.com wishes you the best of luck and a great run!

As The World Turns' Ryan Serhant...