As The World Turns’ Ryan Serhant Lands A Play 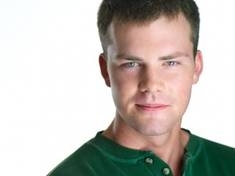 His character, Evan Walsh IV, may have been killed off after only a few weeks, but Ryan Serhant’s time in the role has certainly paid off. Since leaving As The World Turns in March, Ryan has appeared in the play “Happy Birthday/I’m Dead” and filmed the short film “2021”. Now, Soaps.com has learned that he will star in a new play “The Wrath of Aphrodite”!

Ryan will play Hippolytus, a prince in ancient Greece.

Hippolytus and his friends have all pledged to become celibate. But, Hippolytus soon realizes that 1) his best friend is in love with him and 2) his step-mother has fallen under Aphrodite's spell and is madly in lust with him! Which love will survive?

For ticket information, click here. The play runs Fridays, Saturdays and Sundays from May 23, 2008 through June 1, 2008. The play will appear at the TBG Arts Center, 312 West 36th Street, 3rd Floor in New York, New York.

By the way, fans, this isn't Ryan's only news. If you can't make it to New York to see the play and simply have to see him again - you can see his hands! Ryan was signed to be a hand model for the new AT&T Wireless campaign. So, if you see an AT&T ad and the model looks familiar, now you know why!

Congratulations on your new role, Ryan! We miss you in Oakdale but wish you the very best of luck with your new roles!