Some familiar faces arrive at ATWT 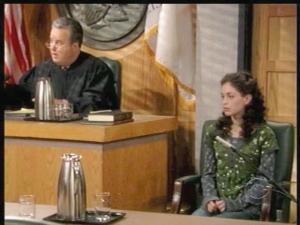 As soap opera fans we become really familiar with our favorite characters. Who could forget Brad’s expression when he realizes he loved Katie? Or Henry’s dismay when he became the owner of the diner? Or JJ’s fighting attitude when he was kidnapped? Yeah, me either. But every now and again a familiar face that I haven’t seen in Oakdale before catches my attention.

I thought it would be fun to catch up with a couple of day players to find out where we may have seen them before their big As The World Turns debut.

Chris Hartl appeared on February 28 as one of the tough guys who tried to beat up Luke and Noah on the way to Statesville Prison to see Colonel Mayer. You may remember Chris from a few guest appearances in popular television shows like “Law & Order: Special Victims Unit”, “The Bedford Diaries” or “Rescue Me”. He also just finished working on the short comedy “Acting 101”, a film that follows a few acting students who really let themselves go!

Will Poston, the other tough guy, isn't so unfamiliar to some of you. He also played Sam, another day-player, in 2002. After that gig, Will landed on another CBS sudser, Guiding Light, where he played Connor for two episodes in 2005-2006. Most recently, he played Officer Ralph in the film "Pesticide".

Tala Ashe joined the cast in Oakdale late in February, as well. Many fans have already taken a liking to the young actress, though several are concerned that she might hurt the Luke/Noah relationship. Before coming to Oakdale, Tala acted in the film "Waiting in Beijing", which will be released later this year.

Several new faces appeared just before and during the trial to determine Hallie's custody. First was Leah Johnston, who played the babysitter that Sofie kind of stalked. Some of you may remember her from an episode of "Gossip Girl" when Leah played a cellphone camera gril. Next was Erik Heger, Sofie's lawyer. Erik is no stranger to soaps. Also in 2008, he played the role of Lewis Cody on One Life To Live! Finally, Adam LeFevre played the judge in the case. Adam is a very familiar face to television fans, especially those in Oakdale, because he has played Judge Collins off and on since 1998. Though he is usually only on for a day or two at a time, this makes him a really familiar Oakdale face! In addition to his time on ATWT he has acted in movies such as "Fool's Gold" and television series such as "Law & Order: Special Victim's Unit".

And let's not forget about another lawyer. When Emily was questioned about Dusty's death, Mark Jacoby came to her rescue as high-powered attorney Tripp. The law and order side of his role was no stretch because Mark has acted in several cop dramas including two of the "Law & Order" franchises. Playing a lawyer is only one of his talents, though. Mark also appeared on the soundtrack for "Some Enchanted Evening: Celebrating Oscar Hammerstein II" in 1995!

Finally, some of you may have recognized Parker's therapist beginning in late January. Hope Chernov played Dr. Seidman. In addition to her role in Oakdale, Hope has appeared in several cop dramas including "NYPD Blue", "Law & Order" and "Third Watch". She also acted in the film "Tadpole" in 2002.

There you have it fans. You are up to date with several day-players from recent months. Now you'll know, the next time they make an appearance, just why they are so familiar!