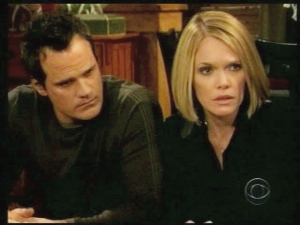 Love is in the air in Oakdale and will take shape as a very special episode on February 14th! Most of you will remember the “step out of time” Victorian Christmas episode last year. Well, the writer’s are taking another step out of time, but this time characters – and fans – won’t visit the Victorian Age. Instead they will get to ask “What If”!

There will be several couples involved in the step out of time including Carly and Jack, Tom and Margo, Luke and Noah, Will and Gwen and Lily and Holden.

Carly and Jack’s segment will feature a recreation of “The Philadelphia Story”. Carly will be set to marry a man who has money but whom she doesn’t love. She’ll have to decide what she really wants.

Tom and Margo will face a court drama: Margo will have failed her police exam and become a lawyer instead. They'll face off in the courtroom drama
of Paul and Emily.

Luke and Noah will ask "What If", too. Noah imagines his life if he had never met Luke! Would he have become a career soldier like his dad? Will will ask the same type of question of his life: he'll wonder what would have happened if he had been able to stop Gwen from sleeping with Casey.

Finally, Lily and Holden, who have just been through a life-or-death situation with Evan, will both wonder what would have happened if Evan hadn't been the one killed on the hospital roof!

What else will happen on Valentine's Day 2008? One thing is for certain: some couples will find love and some, well, it wouldn't be a soap opera without a little pain, now would it? Will 2008 hold a lot of love for our favorite couples? This special episode just might give us a preview of what is to come this year. We'll have to watch and see!

Past ATWT Actors - Where Are They...

Who is Carly Tenney's Greatest Love?