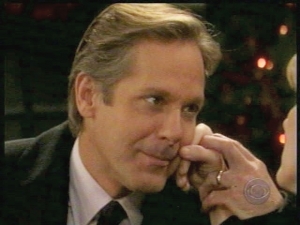 But Craig still had his evil moments! (Soaps.com)

When news broke this week that Scott Bryce, Craig, was leaving As The World Turns a lot of the Oakdale faithful were heartbroken. It seemed that we just got our original-Craig back, and suddenly he is leaving the show? How could it be?

Well, we all know that actors come and go from the soaps, but for many fans there is no Craig like Scott’s Craig. In the past few months he has turned the character around by giving him a heart, albeit a heart still masked in evil-business-tycoon foil.

Rumor has it that he was fired from the show over the Christmas holidays,but that has not been confirmed to us at Soaps.com. A show spokesperson sent us the following statement from Scott.

“I love and respect the cast and crew of As The World Turns and hope their World continues to turn for years to come,” said Scott Bryce.

Scott launched the character of Craig in 1982 and grabbed many viewers from the very beginning. Since coming to Oakdale Craig has been involved in criminal activity - everything from robberies to murder and even baby-napping - but that hasn't stopped fans from loving-to-hate the character.

Most recently, Craig was becoming a new and better man because of his relationship with Meg Snyder. After putting Rosanna into a coma over the true identity of Johnny, his son with Jennifer Donovan, Craig began to turn his character around. He convinced Meg to marry him in order to return Montgomery Enterprises (formerly Worldwide) to Lucinda Walsh. But once they were married and Paul was out of the picture, Meg began relying on Craig - and kept the company! When he learned she was pregnant, it was the icing on the cake for him and it seemed that Meg really was beginning to fall in love with Craig, too.

Then came the news that the paternity test results had been switched and that Paul Ryan was the real father. The "old" Craig returned - and considered causing Meg to miscarry the child - but ultimately the "new" Craig won out. Still, he has lost Meg's love. Now, with only his company will we still see the more tender side of Craig? Only time, and short time at that, will tell!

Two other actors (Hunt Block and Jeffrey Meek) have played the character over the years.

Scott Bryce has won several awards for his portrayal of Craig, including a Soap Opera Digest Award for Outstanding Hero (1988) and Daytime Emmy Nominations in 1986 and 1987.

In addition to his work in soaps, Scott has appeared on primetime shows such as "Law & Order", "Murphy Brown" and "The Facts of Life". He has also worked on the big screen in films like "Up Close and Personal" (with Michelle Pfeiffer).

We will keep you updated on Scott's status on the show and will pass along his final airdate as soon as we can.

Scott, you will be missed by your fans in Oakdale. Good luck in the future!