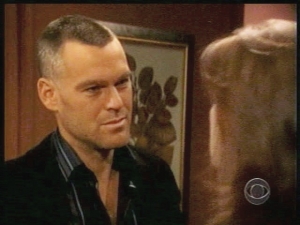 Dusty was found in the research lab. (Soaps.com)

A soap star’s life is never dull: they can be drug addicts one day and hospital administrators the next. But one thing is certain: death is always right around the corner. Last Friday the unthinkable happened in Oakdale: Dusty Donovan was killed!

Grayson McCouch, Dusty, joined the cast in 2003. Since his arrival he has built a loyal fanbase because of his relationship with Jennifer and their son Johnny. That also helped Dusty reconnect with the Munson family. However, after Jennifer’s death everyone in town began to notice that Dusty was more withdrawn than ever before.

Late in 2007 he began an affair with Lily but callously called it off when Emily returned to town. He has been feuding with Chris Hughes and Evan Walsh IV in recent months, too. The affair, combined with a one-night-stand he had with Emily on New Year’s Eve and the hospital feud put a huge spotlight on Dusty.

He was killed on January 18, 2008 when someone poisoned him at the hospital party for MEMO21.

Fans are outraged at the killing of their favorite Oakdale resident and have let their feelings be known. Here is what a few of them had to say:

Jen08 said, “I don’t know why they have to kill off main characters like him, when they could just as easily have him leave town until they come up with another storyline for him.”

Laner111 said, "Dusty has been a main character since the 80's. Why kill him off? Replace him (even though this Dusty is GREAT)."

Nazdrim said, "I loved Dusty. Not only (did)they kill him off, they didn't even bother to give him a good ending. Susan was giving him CPR like she actually was supposed to let him die. I loved Dusty and it was sad he never found happiness after Jennifer."

Gusfan28 said, "Gusfan28 said, "I watched ATWT for only Dusty, because he was a good guy, and when he needed to be, a bad guy. Like Barbara said. . .since he lost Jennifer, he never smiled or found true happiness, except when he was holding Johnny. Then he would smile and be the Dusty we knew and loved."

Matt99 said, "I loved when Grayson had been on Another World and was happy when he came to ATWT. He is an awesome actor."

Tsteph1012 said, "Why couldn't they have written him off by having him go search for Jennifer's son? I always liked him very much, but I didn't buy that he was in love with Emily, especially not after what he had with Jennifer."

Gagal said, "I thought the whole thing was a disgrace to Dusty...In a hospital no less. I could have understood had they all been standing in the woods but to have two doctors just start basic CPR and never call a code or anything was beyond ridiculous. Why did they kill Dusty and not let him just leave town?"

What do you think about the murder of Dusty? Was it a good plot twist or should Dusty have simply left town for a few weeks or months and returned later (as a recast) with Johnny? Leave a comment here and your opinion could make it into our next article!

Remember, folks, death is hardly ever permanent in soapland. It could be that Dusty will return to Oakdale at some point in the future.

ATWT Nominated for a Director's...