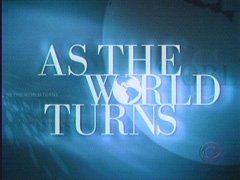 Gwen and Maddie are horrified. (Soaps.com)

Big congratulations go out to the crew of As The World Turns. Director Christopher Goutman has been nominated for a Director’s Guild Award for Outstanding Directorial Achievement in Television!

Christopher was recognized for his work on episode # 12971 from March, 2007. This is Christopher’s third DGA nomination (he was previously nominated in 1998 and 2005).

The episode Christopher was nominated for was especially different: it unfolded as a horror film wound and each scene drew the viewer in to the terror even deeper. But this was only the tip of the iceberg where the drama in Oakdale was concerned. In addition to the "horror" episode, viewers dealt with the return of Carly, which was an emotional high point for many as well as Carly's diagnosis with a terminal brain lesion. Believing that their favorite character would die, many fans threatened to stop watching because of the trauma. When Carly learned she was misdiagnosed, it was only the beginnings of her trials: she is now dealing with the hurt she caused to her children and Jack, the love of her life.

Carly wasn’t alone in the drama department this year. Will and Gwen have had their share of heartbreak: they learned they were pregnant, against all odds, and then lost the baby. They tried surrogacy but those attempts failed and then just before Christmas decided to investigate adoption, only to learn that Will's psychiatric history would keep them from adopting a child. Barbara tried to intervene and "bought" Sofie's child for them, but the deal fell apart just before Christmas.

And let's not forget about Rosanna! (Are you fans seeing a pattern, too? All of this drama centers around our favorite female characters!) Paul helped her wake from a coma, but she learned he was really in love with Meg, who was married to Craig. She tried desperately to keep her husband but it appears that Rosanna will be heartbroken before 2008 is out.

You can watch the DGA Awards this year from the Los Angeles, California Hyatt Century Plaza Hotel on January 26, 2008. We'll keep you updated on the award winners this year.

Soaps.com would like to congratulate Christopher for the nomination. Because of the hard work on the director and other crew members, Oakdale was an incredibly fun place to be in 2007. We wish him the best of luck!!