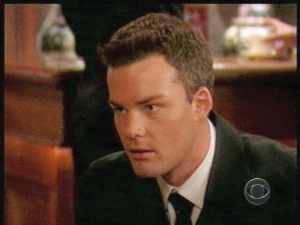 It looks like our favorite InTurn, Evan Walsh IV, is leaving Oakdale. Get out the tissues, soap fans, because according to a post of actor Ryan Serhant’s official website, Evan won’t be seen for much longer on As The World Turns.

In the post Ryan says he had hoped 13-week contract he won from the online InTurn 2 reality competition could be parlayed into a gritty, meaty storyline.

"I am so grateful for these last few months and they could not have come at a better time for me. The contract win was not what I expected, but I tried to do the best with what I was given," wrote Ryan on his blog. "I met some amazing people. . .and I learned a lot."

Ryan has a few suggestions for the InTurn producers, too. According to Ryan, the competition would work better if the producers had an idea of the role which needed to be fulfilled before casting the reality show. That way they could be looking for a specific actor for a specific role rather than creating a short-term role that may or may not match that actor's abilities.

CBS and InTurn producers have begun the casting process for the next installment of InTurn. You can learn more about casting for InTurn 3 by clicking here.

Speaking of InTurn, we haven't seen much of Eli, the first InTurn winner lately either. And Lauretta Vaughn, the runner-up to Ryan, was last seen in handcuffs when her character, Kit, was arrested and hauled back to Idaho. Will we see Eli or Kit in the future? We'll have to wait and see.

Ryan's last airdate, according to his blog, is February 14th. Don't worry about him, though, because he is already hard at work on his next play! Ryan is in rehearsals for the play "Fat Kids on Fire" which is a Phare Play production. The play opens on January 26th, so if you're in New York check it out! Ryan also recently completed a short film called "Runway World".

Soaps.com would like to wish the best luck to Ryan in the future. We'll miss you in Oakdale. . .and hope you come back one of these days!

ATWT Nominated for a Director's...