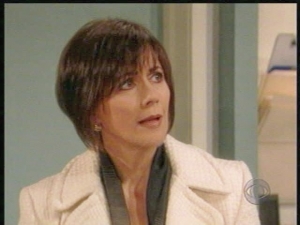 Will anyone help Barbara out? (Soaps.com)

Just a couple of months ago, Colleen Zenk Pinter told the world that she had been battling oral cancer for several months. Now, it looks like As The World Turns is going to reach into Colleen’s real life for her character, Barbara’s, next battle.

Earlier this week, Barbara received bad news from her doctor. Though we haven’t been told on-screen yet what exactly is happening with Barbara, Soaps.com has learned that she will be stricken with the same disease that Colleen has battled in real life – oral cancer!

Colleen underwent three surgeries and had part of her tongue removed during her treatment. She also had radiation therapy. Fans first noticed the difference in Colleen's speech early in 2007, but the star didn't tell her story until October of last year. You can read about Colleen's cancer battle here. The only lingering effect from the cancer is a slight lisp. Other than that Colleen says she is 100%!

The storyline seems like a case of "great minds thinking alike". Colleen says she was getting ready to approach the writers and producers of the show with the idea of beginning a story dealing with oral cancer when they brought the story to her instead!

Oral cancer is becoming more prevalent, especially in women. Researchers have found a link between oral cancer and the virus that causes cervical cancer. The cancer is also linked to the use of alcohol and tobacco products. Doctors estimate that 37,000 people will be stricken with the disease this year.

The good news is that, if found early enough, between 80% and 90% of patients can survive.

Soaps.com is very glad that Colleen has received a clean bill of health from her doctors and we applaud the producers and writers at ATWT for bringing a real story about oral cancer to daytime television. If you would like to send Colleen or the writers a note of thanks you can do so by clicking here.