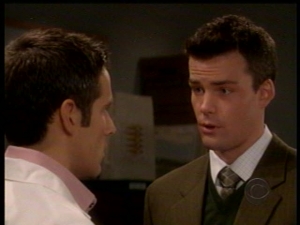 Hey As The World Turns fans, start exercising your acting chops. Soaps.com has learned that CBS is casting for a third season of the Internet hit InTurn! This could be your chance to win a role with your favorite soap stars – and become a soap star yourself!

InTurn is an online only reality show which puts actors and actresses in a New York loft, tapes their personal interactions and has them all vying for one role on the daytime drama.

During the taping, the contestants are given scenes to learn and are even offered the chance to talk to soap actors and actresses to learn some of their tricks of the trade. The winner of the show wins a 13-week contract with ATWT.

You can learn more about the casting process and how you can apply by clicking here.

The first InTurn winner was Alex Charak in 2006. He played Elwood Hoffman and was last instrumental as Cheri Love's assistant. He helped to put Dusty's and Allison's sex tape on the Internet, breaking up Dusty and Emily in the process. The role is currently on recurring status.

Just a few weeks ago the second place finisher, Lauretta Vaughn, also joined the cast of ATWT in the role of Kit. She began playing the role during the InTurn taping as part of the competition. The role was made a recurring role in December. Kit, and her boyfriend Sam, have become a bone of contention between Carly and Jack.

The InTurn producers are looking for nine actors and actresses to compete in the next reality show. They will look all over the country. If you've ever wanted to be a soap star, this could be your chance! For two weeks you'll have the chance to live in a Brooklyn loft, act out scenes and meet with the shows producers, writers and actors. What could be better?

Maybe this - the top three finishers will have small parts on the show to help determine the ultimate winner, who will receive a 13-week contract in Oakdale!

The casting call is open to men and women between the ages of 18 and 34.

Good luck from all of us at Soaps.com to any of you who may apply - and win a slot in the new season!

As The World Turns Nominated for a...