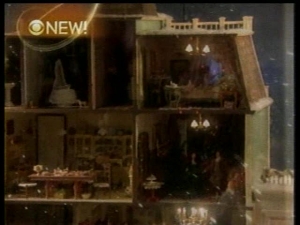 Some storylines are very similar! (Soaps.com)

Stand-alone Christmas episodes are nothing new to daytime television viewers. Many fans, in fact, say these stand-alones are a nice change of pace from the day to day drama of particular storylines. This year As The World Turns has something really special planned for fans: a mini-Oakdale!

That's right, fans will see Katie, Brad, Carly, Jack and many more characters as if they were living in the late 1800s/early 1900s! And, by the way, they won't be Katie, Jack, Brad or Carly, either! But that is all the teaser information you get, we don't want to spoil the surprise - or the suspense!

Here is how the episode begins: Lucinda, Faith and Natalie are walking through Old Town after seeing "The Nutcracker" when they happen upon a Victorian Dollhouse in a store window display. The dollhouse captures their imaginations and we fans will be treated to a fun look into the past.

The entire cast will take part in the episode and we'll see them decked out in great fashions from the Victorian era.

This won't be all the writers of ATWT have in store for us this holiday season. Fans can expect the residents of Oakdale to celebrate - in real time - with friends and family throughout the holiday season.