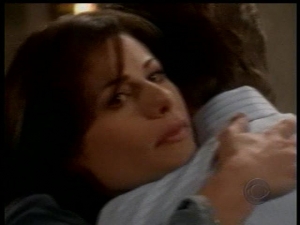 Incurable, unnamed diseases, comas, car accidents. They are all staples of daytime television, but this week As The World Turns writers turned to a very real disease to ramp up the tension in the Meg/Craig/Paul baby triangle.

When Craig and Meg visited her doctor on December 13th, he told them that Meg was a carrier of Gaucher’s Disease (it’s pronounced go-SHAYS). Because of limited time, and because explaining diseases doesn’t make for exciting television, fans didn’t learn much about the disease other than the fact that it could harm Meg’s baby. We thought we’d enlighten viewers with a little history – and an explanation – about the disease.

It was first discovered in 1880 by a French doctor and is most common in Eastern or Central European Jews (called Ashkenazi Jews).

According to the Mayo Clinic, Gaucher’s Disease is a disorder which affects organs like the liver, spleen or lungs and even bone marrow by allowing a build-up of fatty substances surrounding the affected area.

These substances are harmful because they can cause the organs to enlarge; when the disease affects bone marrow it can cause excruciating bone pain.

In many cases symptoms will not reveal themselves until adulthood, but some children are seriously affected by the disease. Bone pain and fractures are usually the first symptoms to occur. Other symptoms include enlarged organs (your doctor will note this), anemia and excessive fatigue. The disease can also manifest itself through easy bruising of the skin.

There are treatments for the disease, which is very rarely fatal. In most cases enzyme replacement therapy is called for. This therapy will replace the deficient enzymes in the body, which can help reduce the size of enlarged organs and bone problems. This treatment is especially effective in children because their organs and bones may not have been affected as long as adults with the disease. In some cases a bone marrow transplant is the most effective treatment.

When the disease is treated in a timely manner, patients have normal life expectancies. However, the prognosis in children is much worse. In many cases when infants are afflicted with the disease they do not live past the age of two.

You can learn more about how to help researchers find a cure by logging on to the National Gaucher Foundation website here.

How will this disease play out in Oakdale? We will have to wait and see. In the mean time, kudos to ATWT for bringing a rarely heard of disease onto the canvas so that fans can learn more about it.