The period also experienced some shifts in the ratings as game shows became a force to be reckoned with and soaps were expanding to full hour programs. The series remained in the top five Daytime soaps for most of the decade when it wasn't tying for first place. ATWT became the second show on CBS to last an hour. The growth of competition for its time slot from ABC's expanded Daytime lineup ended up costing the show a lot of viewers.

It was also the decade when the pop appeal of Daytime led to soap operas being mercilessly mocked on Primetime. "Mary Hartman, Mary Hartman" and "Soap" skewered the conventions of the genre and Carol Burnett, using a title suggested by Eileen Fulton (Lisa), famous parodied ATWT with "As the Stomach Turns."

Be sure to check out our Look Back At As The World Turns: The 1960s. (Video Included).

Did you know that Soaps.com is on Twitter @soapoperafan, and Facebook? Join us! And keep an eye on our ATWT newsroom for more glimpses back at the show's rich history. 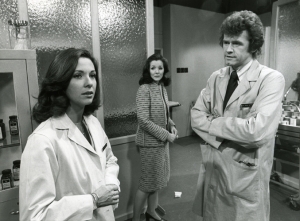 Join Soaps.com for the third installment of our decade by decade track through the history of a TV legend.

The 1970s saw a flurry of changes in the writing department for the show. They went through fourteen writers, in various combinations, over the course of the decade. Irna Phillips even briefly returned to oversee the show but didn’t stick around. Robert Soderberg and Edith Sommer were the scribes for most of the decade, though Douglas Marland was brought in, only to last a few weeks. The decade ended under the pen of Jerome and Bridget Dobson, who had been moved over from sister soap, Guiding Light.

The show took on a darker feel as the decade went on. The Sullivan sisters arrived and Kim (Kathryn Hays) would soon prove to be a major player in the Oakdale scene. She broke the cliches of the soap opera heroine by being tougher and more independent than any other woman on the show. When Irna Phillips refused to punish Kim for her tawdry behavior as the viewers demanded, CBS fired her and forced the character to have a miscarriage.

Villain James Stenbeck was introduced into things, as was John Dixon and Supercouple Tom and Margo Hughes. Lisa suffered from a hysterical pregnancy and pseudo-incestuous love affairs abounded. Penny left town and many of the established families were rapidly written out through death or by other means. Plots centered on accidental deaths, blackmail, miscarriages, affairs, plenty of alcoholism, disco parties, debates about birth control and many divorces. The Stewart family expanded and the Wade clan diminished. Other things changed too. The show went into color and the days of live broadcasting ended.

As The World Turns Video Promo: A Reason To Leave