A Look Back At As The World Turns: The Beginning. (Video Included)

In the 1950s, the young suburban professionals of the Hughes and Lowell families were the focus of the show, but there were also the Bakers, the Turners, and the Meadows. There were an array of plots involving divorces, adoptions, secret marriages and terminal illnesses. Characters Nancy, Bob and Penny Hughes were introduced to audiences for the first time in the premiere episode and the fabric of the series would be weaved around their family. Nancy (played by Helen Wagner) would stay with the show for most of its run. Bob (played by Don Hastings) would provide the backbone for the entire series, bookending it from the first until the final episode.

When the series ends its run on Friday September 17, that honor will fall to Britain's "Coronation Street." It has been a long run. 54 years is nothing short of astounding in the shark tank of the television industry.

Did you know that Soaps.com is on Twitter @soapoperafan, and Facebook? Join us! Keep an eye on our newsroom for more glimpses back at the show's rich history and check out our History of Soaps: Past Meets The Present. 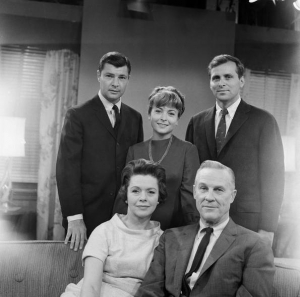 Since the end of Guiding Light, its fellow Procter & Gamble soap, ATWT had taken on the mantle of the longest running soap in TV history.

In light of the end of an era drawing near, here’s a little glance back at the beginning. Created in 1956 by soap opera pioneer Irna Phillips, the series continued her pursuit of a unique form of American mythology that combined moralizing melodrama with social realism. “As the world turns, we know the bleakness of winter, the promise of spring, the fullness of summer and the harvest of autumn—the cycle of life is complete,” she wrote, poetically summarizing the sweep the show was intended to encapsulate.

The series had its premiere on April 2 at 1:30 PM. It was the first soap to run a full half-hour, rather than the normal 15 minutes. This took some getting used to from viewers who weren’t accustomed to spending that much time paying attention to a TV show. Within two years, however, the series had shot up in the ratings and would begin a domination of Daytime that would last for two decades.

As The World Turns Video Promo: Getting To The Bottom Of Things