But then again...
It would have been terrible for Reid to die with the kind of sentimentality he despised. Even Luke realized that the sentimental and saintly fiasco that everyone was conducting around a guy they really didn't like was nonsense and he called them out on it. I liked Reid from the start, but I feared what would happen to him. It seemed inevitable that he would get sucked into one of the cardinal sins of character design which afflict so many people on Daytime, and he ended up succumbing to several. Brash, rude, arrogant and full of disgust for Oakdale, he was a breath of fresh air. For awhile, he even seemed like he would be a break from the trap almost every other character who has been added over the past few years amounted to - either a banal cliché or an ethnic stereotype. Unfortunately, Reid's character was showing signs that he was on the way to such a fate. The curmudgeony jerk who is really a sweetheart or a saint when you get beneath the gruff exterior is basically the male equivalent of a hooker with a heart of gold. Of course, I'm a twit for imagining it could have been otherwise, but I still wish he could have just been a snarky jerk who wanted to get into Luke's pants. So, while I'm genuinely annoyed that they would sacrifice Reid for a non-entity of a character like Chris, I'm kind of glad that it was, deliberately or not, such a problematic mess. If they were going to kill him, that's appropriate and it made all the redemption crap they tried to pull fall flat.

Did you know that Soaps.com is on Twitter @soapoperafan, and Facebook? Join us! To find out what Terri Columbino had to say about the final days of the show, check out this podcast. 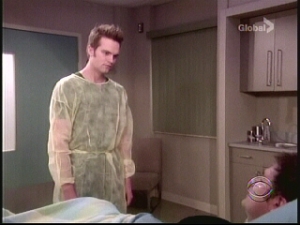 Thoughts on the week of September 6:

It was a truncated penultimate week to the series and only one plot was put into central focus. I really don’t want to bad mouth the show as it heads to the end, but it’s kind of hard not to at the moment. But first, a few good things…

Good things.
John and Lucinda’s scenes were excellent. Within a small period of time they managed to crisscross a lot of character history and hit a lot of strong and decisive notes. These exchanges were also strengthened by the fact that they weren’t filled with the platitudes that saturated so much of the week. Their chemistry was still great and every moment with them was a pleasure. The doctor even decided to stick around town and spent some time with Margo. Yes, it was all pretty quick and kind of superficial, but it was a nice gesture, even though John’s return has only hinted at his nasty and complex relationships with most of the townspeople. If only he’d come back sooner… Vote in our poll and let Soaps.com know what your favorite John Dixon story was. We also got to meet one of Reid’s relatives. Soap vet James Rebhorn showed up to give an intense and understated performance as Reid’s uncle. Even the presence of Lily and Holden couldn’t ruin his scenes. I’ve always thought of Holden more as a hat rack than a real character; they just keeping forgetting to put that hat on top.

The train wreck otherwise known as Reid’s death.
It was sad in that special way that only soaps can be sad, but I had the tugging sense that the people orchestrating it didn’t quite believe in it. Was knocking him off with a train wreck intended to be a twisted joke? That would make sense considering the surprising degree of humor which was bubbling around in Tuesday’s episode. There was a casualness to his death and a kind of morbidity which is rare. Although everyone, whether they knew him or not, leaped into sanctifying the very unsaintly man, they also dealt with his death in a rather detached way. There were jokes all over the place. Chris constantly referred to Reid as a ‘jerk’ (which wasn’t a really great way to get sympathy for his character either) and there were puns about giving things from the heart and bleeding hearts etc. peppered throughout people’s conversations. I don’t understand if they were trying to play the whole thing like it was a black comedy or if it was intended to be as tragic as other aspects would suggest. Luke and Katie’s grief was real enough, (and Van Hansis did a fine job) but it was presented in a way that was so at odds with everything else that it almost seemed like it was cut and pasted into things just to add some balance. Instead, it threw everything off. There was something interesting in the tension that was created, but I don’t know if it was the result of the incompetence of the writers or if it was deliberately alienating.

As The World Turns Video Promo: Getting To The Bottom Of Things