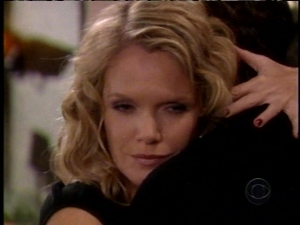 It has been a crazy couple of months in Oakdale: Jack and Katie got married, Carly began feeling sick (and was diagnosed with a terminal disease) and Jack stepped up to the plate for her. Since, we’ve learned that Carly was mis-diagnosed by her doctors but she insists on living out her lie to get Jack back.

The entire storyline has some long-term “CarJack” fans seeing red – and blaming the As the World Turns writing staff for “ruining” their favorite leading lady.

Here is what a few of them have had to say:

AgentSweetness said, “It’s hard to watch Carly act like this. I love her but the writers are doing a good job of letting me dislike her. I can’t help disliking her, in fact I can’t watch her.”

All4Babe said, “Right now I am just disgusted with the writers, I don’t know why they would want to destroy one of the most core/loved characters on the show, but I hope they think of something really good that could redeem Carly and put her back with Jack.”

Martha26 said, "I think they wanted to hurt the Carly fan base and looks like they have succeeded. . .Fans who like Carly are disliking her. . .The writers are hurting the Carjack fanbase, everything that held true value, like Montana, has been tainted by 'the lie'. They only have to smash the compass to make it truly final."

But not everyone is making the writers the scapegoat for the storyline.

Chrissi said, "The writers want people to watch. I highly doubt if they have a vested interest in hacking up people's lovely couples.

And it doesn't bother me a bit - the writing right now. I think its great story material. I like both Carly and Katie and I see why they do what they do, so they're easy to forgive. Haha and in soaps, ya have to be forgiving if you're going to watch!"

RevasFan said, "The idea that writers would purposely try to hurt their viewers or a specific fanbase is nonsense to me."

LukesBoy said, "People who write for television or any other medium are not idling their time until something better comes along. Do you know how hard it is to come by a job writing for a television show? These people are trying to build a career, the head writers to keep working in the positions that they have, and the other writers to get recognition for their work and make the move to bigger and better positions. Of course they care about what they are doing, and want others to see it as good work."

But it isn't just this storyline that has fans asking questions. Some say that the disappearance of favorite sets like Lily's home and the absence of favorite characters like Lucinda are all pointing to bad news - like cancellation! - for our favorite soap city.

News that ATWT's contract, along with a few other CBS Soaps, would come up in July 2008 was released a few days ago. Since then Soaps.com has learned that the CBS soaps have plans to cut their budgets in the New Year to ensure that our favorite shows don't go off the air. Those budget cuts don't include getting rid of any characters, but fans can expect to see some changes. You can read about that here.

Now, I can't tell the future, but I think (and hope!) ATWT will be around for a long, long time to come.

What Happened to My Favorite Oakdale...