John's return.
It's also been nice to have John Dixon back, even if it's for a pretty thankless plot as far as he's concerned. He's been a delight in his brief scenes with Lucinda, but I'm a bit weirded out by how well he's gotten along with Bob and Kim, even considering the situation. Anyway, his return is a pleasant gesture at best. It hasn't amounted to much else.

Losing heart.
Noah has finally developed a personality over his last few appearances and he seems to be a jerk. He's moving to LA to be with all the other Corbin Fisher rejects, but he made a final bid to lure Luke away first. He wouldn't go because he finally admitted that he's fallen for Reid. The doctor admitted the same. Reid actually had a nice week. Caring, but never schmaltzy; just balanced. Of course, he's a real softy inside. You'd have to be in order to tolerate, let alone like, Katie. He softened up way too fast for my liking, but what are you going to do? It's the Snyder effect. Any man or woman who gets involved with that clan either gets a soft head or a soft heart. Seeing everyone suffering, he decided to run off and, more or less, steal a heart for Chris. I felt kind of queasy as everyone debated taking hearts away from people to give to Chris. I mean, I don't want the guy dead, but I wouldn't let anyone else die for him, even if it was a baboon. Reid raced off after telling Luke that he loved him and then got stuck on some railroad tracks to get run down. Since this whole fiasco is going to stretch through next week, I'm not going to get into how much this sucks, but it really does. How do you feel about it? Vote in our poll and let us know. 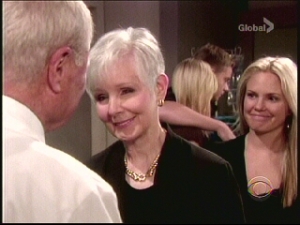 Thoughts on the week of August 30:

It was a rather morbid week in Oakdale. It was also highly concentrated, which helped a great deal. There was no CarJack to be seen. No Dusty or Janet, no Craig or Lily. Unfortunately there was quite a bit of Katie but beggars can’t be choosers.

No more Nancy.
Although I knew it was coming, I found Nancy’s death rather odd. Maybe disappointing would be a better way of putting it. There wasn’t even a funeral. I think it was the least ceremonial death for a major character I’ve ever seen. I can understand why. She’s been largely absent for years and they don’t have a lot of time left, but still… When Alice Horton died on Days they spun it out for weeks and Nancy’s death, coinciding with the end of the show, has even more symbolic value. It’s not that it was badly done exactly, but more like it was underdone and it left an eerie depressing tone over everything which made Chris’ situation feel a lot less dramatic and just plain dreary. Maybe that’s part of some larger plan for emotional catharsis as the show ushers to the end? I know the final week is going to flip things into optimism overdrive. We’ll have to wait and see if it actually works… But the candle scene with her family and friends was nice and simple and Bob and Kim’s scene discussing her passing the next day was also subtle and quite decent. Kim had a bunch of good scenes actually.

Return engagement.
Alison and Casey got engaged again. That was cute, even though their past engagement was kind of painful. For some reason, I always manage to completely ignore the history of both characters so I never know how to feel about anything they do. They’re just kind of there and vaguely pleasant. I guess it doesn’t help that people have been constantly getting married and engaged on the show for the past few months, big soap events that are generally played anti-climatically for some reason in Oakdale. Henry and Barbara actually made that work and made it touching, but most of the time it feels like these things only happen so that they can flop and be undone.

As The World Turns Video Promo: Worrying About Chris

As The World Turns Saturday Teaser Poll: A Piece For Reid