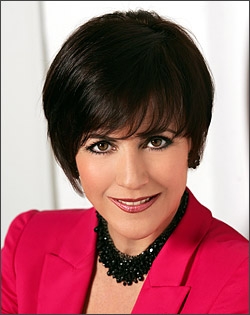 For several weeks, Soaps.com has been receiving questions from fans wondering about Colleen Zenk Pinter’s, Barbara’s, speech. In the last few months, Colleen has spoken with a lisp. This morning on the CBS Early Show, Colleen talked about her changing speech patterns because of a cancer scare!

About seven months ago, Colleen says she discovered a canker sore in her mouth. That canker went away but other canker sores continued to come back so she saw her doctor. The next day a specialist told her it was stage-two oral cancer. She underwent three surgeries and had part of her tongue removed and reconstructed. Colleen also had radio-active beads inserted into her tongue to battle the disease, but doctors say she is cancer-free now.

"I want to thank the fans for the love and support they have sent my way these past months. You will never know how much your kind words and encouragement have meant to me," said Colleen in a statement. "Today I am cancer-free,but my disease is with me every second of every day. My tongue is hard, lumpy, laced with scar tissue and often covered with painful blisters. It affects my speech, how I eat, how I drink and how I kiss my husband. Yet, I am lucky. My cancer was Stage II when diagnosed. I had one of the country's best cancer teams to surgically remove the tumor and surrounding tissues, and reconstruct what remained of my tongue so that I can lead a relatively normal life. If I had only known. Early detection is as easy as a trip to the dentist - a five minute exam and you don't even have to take your clothes off - and vital in preventing
this under-the-radar, ruthless cancer," she went on to say.

The only lingering effect for Colleen is the lisp that fans have been asking about.

Here is a little information about oral cancer: it kills more people each year than cervical cancer, skin cancer or prostate cancer. The disease has been occurring in more women and recently doctors were able to link the cancer to the same HPV virus that is associated with cervical cancer. The cancer is also linked to the use of tobacco and alcohol products. Doctors say that 37,000 people will be diagnosed with oral cancer this year in the United States. When the cancer is found early, as in Colleen's case, there is an 80% to 90% survival rate.

Colleen was very lucky. She lost part of her tongue but other patients who have had oral cancer have lost portions of their jaws, which makes even denture wearing hard. Some patients have lost their ability to properly chew and swallow and in some cases have lost the ability to speak clearly. You can learn more about the disease by visiting the Oral Cancer Foundation here.

Soaps.com is very glad that Colleen has beaten this cancer diagnosis. If you would like to contact Colleen, you can do so through As The World Turns by clicking here.

What Happened to My Favorite Oakdale...