A quickie marriage that works.
Henry and Barbara announced their engagement. Paul and Will were less than comfortable to hear the news and the reasons were pretty clear to begin with. Then they got kind of convoluted when Paul began suggesting that Henry would carry on the Stenbeck curse. But it all worked out and they got married with their family and friends around them. It was rushed together but all quite lovely. I think the lack of ceremony actually managed to enhance the intensity of the vows. Having Barb, Henry and Paul all imagine James was there and then 'exorcise' him by burning photos was also a very nice touch.

On the sidelines.
Chris spent most of the week panting for breath as he roved around. This incarnation of Chris hasn't been around long enough for me to care much about what happens to him. There's just something flat about him, like the matte finish of a photo. At least his crummy health brought John Dixon back. Actually, Reid had to call John in. Oakdale's great curmudgeon had to spend the week worrying about Chris, but we also got to see him melt a little more for Luke. They'll actually have stuff to do next week. 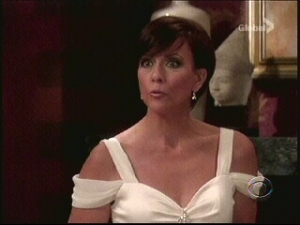 Thoughts on the week of August 23:

The week was pretty cleanly divided between two sets of stories. The first half concentrated on the battle with Blackie and Ralph at Avalon Castle and the second with Henry and Barbara’s engagement as well as the issues with Chris, Katie, Luke and Reid.

Regenerating at the health spa.
Avalon Castle, of course, is named for the mythical resting place of King Arthur, the magical fairy land he was ushered off to once he was done fighting his wars. So there was a bit of irony in using the name to stage this battle between a few stereotypical thugs and Oakdale’s most flawed cop, but not that much. Themes of chivalry and redemption were all over the place. Manzos’ reappearance left Jack with the chance to get closure for Brad’s death. It was all tied up in a nice little parcel. In failing to save Janet, Dusty actually got her back. In capturing Ralph, Jack can finally let Janet go and move on with Carly. Even the action scenes weren’t that bad (they usually are and not just on ATWT). The overtly symbolic element of things was only added to by how empty the place was.

Run, run Lucinda.
I found Ralph and Lucinda’s scenes interestingly effective considering their history together was basically invented for the episode. It would have been nice if this could have been developed and fleshed out some more. Oh well… It was also a nice break from Blackthorn trying to do a James Cagney impersonation. The Ralph and Lucinda scenes helped to show how conflicted and confused she really is. There was a certain awkward vulnerability to her which she usually hides and it came out quite nicely. Now I’m just afraid that they’ll be trying to redeem her fast so that she and Lily can have closure, or whatever it would be called. I’m not looking forward to that possibility. Last minute redemptions, like death bed confessions, are pretty tacky. I prefer the integrity of unyielding nastiness any day. Do you want her redeemed? Vote in our poll and let Soaps.com know.

Chivalry and getting all wet.
Craig was attempting to be Lily’s knight in shining armor, but they both knew that he’s really more of a dark knight and chivalry really isn’t his thing. Although she denied their chemistry (which was sort of hard to believe), she also pointed out that he’s a lot more like Lucinda than he’d like to admit (which is pretty true). Depressingly, she left Craig and his advances behind to return to Holden on his equally symbolic farmstead. What was interesting about that was that Holden got Lily back by not actually doing anything for once since his last attempts to be chivalrous with her were all flops.

As The World Turns Video Promo: The Morning After

As The World Turns Saturday Teaser Poll: Death In Oakdale