Carnal CK.
Katie and Chris finally went to bed. I guess the build-up hasn't actually been that extensive – their scenes just feel really long. The payoff was virtually non-existent. Once again, the show failed to provide sex in the afternoon. Not that I was all that keen to see them have sex... or play hopscotch, or go kayaking, or anything else they could do. But what's the point of a soap if nothing dirty happens? I'm not sure even Dr. Oliver can save them.

Doctors orders.
Reid continued to get looped into helping Chris. This was supposed to demonstrate that he's become much more compassionate, but it might simply demonstrate that his judgment has been impaired. It ended up causing a fight with Luke, kind of. Actually, it was mostly Noah's fault. After all of this time, Noah invited Luke to run away with him to LA. They both realized it was too late for that, but they did share a rather good little scene at Java that allowed Noah some of the better material he's had in a very long time. Then again, since Luke is the CEO of a major corporation and one of the heads of the hospital board, why would he give that up to be another starving movie wannabe in California? And then again, considering he's a multimillionaire and an adult, why does he still live with his mom in her bungalow?

And the rest...
Lily finally had the chance to really let her mom have it. She did it with class too in a really good scene that both actresses invested with multiple layers of detail. Lucinda's been kind of a mess lately, but she seemed more human than she has been in awhile. She even cried, which was downright shocking. This has also placed Lily in a position to get with Craig, which is what I'm rooting for, but I'm not holding my breath on that working out. The Blackie-Carly-Jack-Janet-Dusty thing continued and Ralph returned to the fold. We'll see him next week. Janet just wanted a nap most of the time. I can understand why.

Anyway, that was my mindless ranting for the week. Please feel free to leave your thoughts and opinions in the comments section below and remember that this is all in fun. 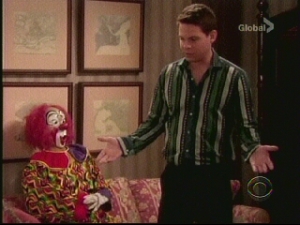 The race to the finish continued this week and quite a few plots kicked into overdrive to try and get there. Although rushing isn’t always the best thing, the week actually flew by quite nicely. Finally ending the Barbarnapping was great to see.

Free at last.
Thanks to knocking over a load bearing post into the electrical panel, Barbara and Emily were nearly smoked to death in the wine cellar. It turned out that Paul’s nose trumped his psychic abilities and was enough to save them from doom. He sniffed them out and they were rescued, no worse for wear. The lengthy captivity barely smeared Babs’ makeup or got a hair on her head dirty. It seemed to make her reflect more on what she wants though, so that’s a good thing. It was also a good thing that she didn’t just fall into Henry’s arms but slapped him back and told him she never wanted to see him again. Since the actual rescue didn’t succeed in being all that dramatic, this little twist was good. But by the end of the episode, he was dropping to a knee to propose and she was accepting, which was also nice to see. Having Chuckles there was also a nice touch. Vote in our poll and Soaps.com know what else you want to see together before the end.

Other business.
Other good things that came out of the end of the wine cellar wangdangdoodle: Emily bickering with Barbara is usually fun, but it was getting kind of thin. At least they seem to be verging on a truce. Afterwards, watching her break down to Paul about what a stinker she’d been was actually nearly touching. The entire ordeal is being used as an expedient to heal relationships: Gwen and Will got over their past problems with Paul, Henry and Paul got to do something else as brothers etc.. Of course, Iris hasn’t been so lucky. I kind of like Iris. She always seems like she’s acting on a different show than everyone else. Another thing I realized was that Will and Gwen can actually be pretty boring.

As The World Turns Saturday Teaser Poll: An Unusual Wedding