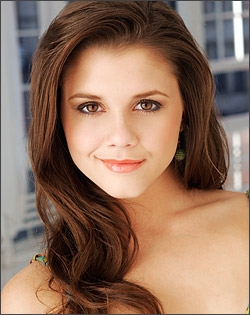 She has only been in Oakdale since 2005, but actress Alexandra Chando, Maddie, is reported to be leaving As The World Turns later this month! Reports say Maddie will be seen for the last time when she leaves town for college on October 26th.

We may have only known Maddie for a few months but several fans are disappointed that our favorite college girl won’t be on the canvas much longer. Here is what some of you had to say.

CarJacker4Life said, “I’m so sad to see her go! I love Maddie!”

ZinxyDiva said, "Rats I wanted to see more scenes with her interacting with Nuke. And poor Henry is losing his Bright Eyes."

Joie said, "At least she won't be dying, you know like a lot of shows kill off the characters who leave. This way SHE MAY COME BACK!"

J+CPlease said, "I'm not that upset about her leaving, but only because she hasn't had a good storyline since Casey left."

ErleeBird said, "Oh No! She's one of my favorites on the show! And one of the few women who are not "filled" with themselves! TRIPLE HOLY COW!!!!!"

The storyline surrounding Maddie has relegated her to a mostly back-burner actress in recent months - she went to Branson for Gwen's singing debut earlier this summer and got involved with Noah. Once they returned, Noah was adamant that Maddie move in with him and stay in Oakdale (so that he could ignore his feelings for Luke) so they could attend college together. Now that Noah has come out of the closet, it appears Maddie is free to follow her own dreams and attend Wesleyan.

However, prior to this summer her storyline (surrounding the kids getting killed last summer) help to earn Alexandra an Emmy nomination for Outstanding Younger Actress in a drama series in 2007.

Will the character of Maddie leave a void in Oakdale? It was fun to see her interacting with both Luke and Noah, especially after Noah came out to her. She could also lend her support to both guys as they struggle with their first real relationship. Or will Maddie only be missed for a few days? After all, with Noah and Luke both admitting their feelings, the story will turn to the growth of their relationship. A relationship of which Maddie isn't a part.

What are your thoughts?