Death race.
Chris has an obscure life threatening disease that needs a miracle cure (Disease story for a dying show - P&G like those). That explains why he keeps falling asleep, although having a conversation with Katie would be enough to knock most people out.

Turning the tables.
This week it was Reid who was pushing Luke away. He didn't feel like he had much choice since Luke doesn't seem capable of shutting up about Noah. Is Reid being too egocentric, or is Luke the one being too socially inept this time around? Reid was probably overreacting but still, it was annoying.

The wine cellar is full.
The kidnapping was mostly played for laughs this week. I guess it has been all along, but since most of the tension in this plot has vanished under the pacing, it has become hard to see much else in it. Emily ended up stumbling on Iris in the wine cellar. She ranted at her and then Gwennie defended her. Iris did all she could to try and channel the kind of drunken showgirl who used to show up in melodramas from the 1940s. Then Emily stumbled upon Barbara in the wine cellar, which was fun until Iris clobbered her with a bottle. Actually, that was fun too. It was also fun to see Henry and Paul arguing about the psychic and Henry dragging the clown around town.

Anyway, that was my mindless ranting for the week. Please feel free to leave your thoughts and opinions in the comments section below and remember that this is all in fun. For a sneak peek into next week, be sure to check out next week's promo video. 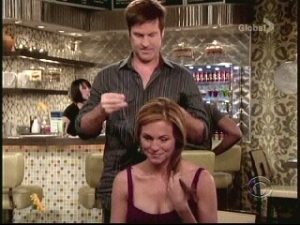 Credit: No idea what to do (Soaps.com)

Thoughts on the week of August 9:

The pacing is picking up again as the series enters its final weeks, which accounts for why some things may feel a little sketched out while others are drawn out.

Poor Craig.
He gets blamed for everything. Although there’s good reason for that, it’s also a bit lazy. Watching Carly and Jack sit around trying to figure out how he was too blame for all of her recent problems was a good laugh. They both realized that blaming him for the fake factory was stupid but persisted in doing it anyway. At least they’re consistent. Meanwhile, Holden tried to blame him for everything so he could ignore most of Lily’s extensive flaws. She’s well aware of them, of course, which is why she is so needy, the one flaw he did point out. That’s why he loves her more than Molly after all. Molly wasn’t needy enough (which is pretty amazing considering how needy Molly was). Actually, Lily isn’t needy enough either, she just allows Holden’s neediness to go into overdrive until it overflows on someone else. It’s depressing watching them move back together. Her history with Craig may stink, but they still have more attractive chemistry.

Poor Lucy.
Dragged into town by Lucinda to be used in another of her games. The difference between a pimp and Lucinda is that a pimp has the integrity to let the girl keep some of the money, or at least offer the pretense of protection. Of course, it wasn’t just Lucinda who was using her, it was Dusty too. She clued into this pretty fast and realized she might as well skip town because being there was pointless. At least she got some sex out of it. And she got to meet her little brother. If only they had more time… it would actually be really interesting to watch Craig’s kids interact more… Gabriel’s mostly been left to mope around town. But who wouldn’t mope with someone like Lucinda throwing their shadow over their life? Lily, Sierra and Lucy shared a great scene where they celebrated the evilest ‘L’ of all, admiring her accomplishments and thanking God that they aren’t like her. Vote in our poll and let us know who you think is the most like Lucinda.

As The World Turns Video Promo: You Knew Before

As The World Turns Saturday Teaser Poll: The Next Step