Luke and Reid were cute again, if a little frustrating.
Unfortunately, they still don't do much other than their 'curmudgeon and his twink' routine, which is enjoyable, but isn't there more? Luke dragged the doctor along to the wedding that wasn't and then later got cold feet when the doctor wanted to push ahead with their relationship. If Noah didn't exist, Luke would be in the running for the lamest gay man in America right now. Reid ended up being the one to 'comfort' Molly over the fact that her fiancé is America's lamest Snyder. The good doctor didn't say anything to give her any comfort, which is exactly what she needed to hear. Molly finally got fed up with coming in second to Lily and decided it was time to leave town.

Katie and Chris decided to move on together... sort of.
She ended up tricking him to go up to the cabin alone so they could get close. He nearly had a heart attack. It turns out that he may have some sort of obscure disease. He tried to hide this from everyone but Reid found out.

At least Babs got interactive.
After weeks of speaking to clowns and hallucinations, Barbara finally got to talk to a person. She and Iris shared some amusing scenes. Iris ended up carting her over to Paul's wine cellar and hiding her behind some bottles. Meanwhile, Henry continued to desperately search for her. But was it really necessary to put him in drag again? It was funny (for a little while) when he was Geneva Swift, but this was just a cheap joke... and not a very good one. Poor Henry deserves better than that. He had some wonderfully humorous and cute scenes with Paul and Margo as he panicked for the woman he loves. 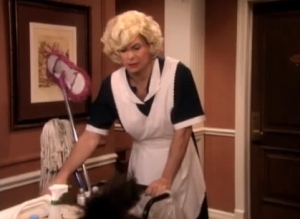 Thoughts on the week of August 2:

The sensation that things are rapidly winding down is starting to sink in. At this point, with pacing being what it is, there isn’t room for much more than finishing out the plots that are currently on display. Maybe that’s why I feel so much anxiety when I watch the show now.

How stupid are these people?
So Lily figured out that the factory in France was as real as Francoise’s accent. You would think that she and Carly would have actually checked into it a little more thoroughly but… It’s Craig I’m most disappointed in. Between Jack and vodka Carly barely has a brain left and between Holden and Damian, the same can be said for Lily. But what’s Craig’s excuse? Was he so desperate to get involved that he didn’t bother considering where his money was going? It’s out of character for him to be this dumb. Vote in our poll and let us know who you think has shown the worst business sense.

And the great romance continued… sort of.
Even more than CarJack, HoLy have managed to pull out every cliché in the soap writer’s handbook and play them out at their worst. He ran off from his wedding to rescue her, basically from her mother, which is rather fitting given their history. But she didn’t need him saving her. If she needs saving from anything it’s from the repetitive stress disorder they would call a relationship. Even if I once liked Holden and Lily together, this would still suck at this point. Craig flew back to Oakdale at supersonic speed while Holden and Lily got trapped in turbulence and had to land in Montreal (which was represented by a shed. If you ever lived in that city as I have, you’d find that hilarious). Unfortunately, this shed didn’t have any ancient marshmallow whip for them to make fluffernutters out of, so they just had to retread their relationship with a diamond.

As The World Turns Video Promo: Iris Takes Over