Stars Thoughts on As the World Turns’ Final Days

On the red carpet before the show, Colleen Zenk Pinter (Barbara Ryan) held back tears from the very moment I told her, "I’m going to miss Barbara terribly!" She managed to speak with Soaps.com for a bit, and I couldn’t believe how she described the last day of taping to be. "I’m just devastated," she exclaimed! "It was horrible! It was actually a very, very beautiful day, but it was so difficult for a lot of us who were there on the last day. As we were doing our scenes there on the set, literally things were being torn off of walls, doors were being taken down and props were being hauled away, because we were done forever once we finished that day. It was rough, very rough!"

If there is anything that could possibly comfort all of you ATWT fans out there as that dreadful day in September slowly, but surely approaches, it may be Colleen’s opinion of the finale of the show. Before she ran to take her seat for the awards ceremony, I asked her, "How do you think the fans of As the World Turns are going to like the finale that has been put together?" Colleen smiled and exclaimed, "I think that the fans are going to be very, very, very, very happy with the whole direction that everything is going in the next few months!"

My thoughts are with all of the fans as you enjoy the final episodes of your much loved soap. I’ve been where you are before. I have loved and lost my favorite soap, and it hurts brutally. I sincerely hope that when the world stops turning in September, you have peace, and that you will think fondly when you reflect back on As the World Turns many years from now. 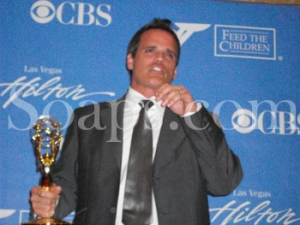 It’s difficult enough for soap fans to say goodbye to their favorite show as they watch the final episode, all edited and in perfect form for broadcasting. It can be emotional to watch each scene as it creeps up to the final moments that have been years, sometimes decades in the making. As emotional and nerve wrecked as we may be, imagine the mental condition of the actors/actresses, cast and crew, that are focused on delivering those wonderful scenes during this time. Some of your favorite actors have talked about As The World Turns final days of filming with Soaps.com. The cast and crew have said their goodbyes and shed the tears for the cancellation of the show that fans and Daytime in general are dreading like the plague.

An amazed Michael Park (Jack Snyder) looked out upon his peers as he accepted his award for Outstanding Lead Actor at the recent Daytime Emmy Award Celebration, and proclaimed, “There’s a party going on in Canandaigua, NY right now, that must be crazy, with my mother, father and grandmother who have watched the show from the beginning!” With all eyes on him as he stood at the microphone on stage in front of his daytime peers, Park expressed to them all, “We had to say goodbye to over 60 members of our family on Wednesday. It was heartbreaking, and I pray you never have to endure what we had to endure on Wednesday!” I’m sure stars from all shows took to heart what Park said, considering the great uncertainty there is among Daytime Soaps right now.