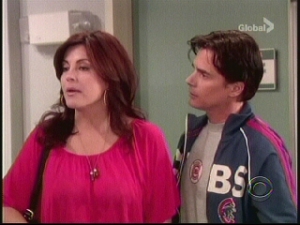 Thoughts on the week of July 26:

It was another week with a lot of string moments, and a few odd ones.

Assorted things.
Carly and Jack had a totally beautiful scene on Monday. Everything about it was expert. But they are still a terrible couple, which only makes it all the more painful. Watching Holden and Molly wasn’t a great deal more appealing. I still can’t figure out what happened to her character to make her implode into the mess she is now. Did she contract some kind of personality disorder from Katie by drinking from the same glass at WOAK? Does Lucinda do anything without being drunk? Is she drunk because she feels bad about what she’s been doing to her daughter, or is it because she is spending so much time around French stereotypes?

More squares.
Lucy is back. She and Dusty acted like they were indifferent to each other but, by the end of the week, they were jumping each other’s bones. Am I being superficial when I find it hilarious to watch Blackie and Dusty argue over Janet? Half of it is because Dusty looks like he’s about two feet taller than the guy and the other is that… it’s Janet. Even she doesn’t seem to care about her newest square of romance. Blackie kissed her, Dusty stormed off and then she nodded off in the middle of a conversation. Was she ill, or was that a homage to the suffering viewers at home? (Blackthorn’s jacket was open so it read ‘BS’ the whole time, which I assume was a joke.) Vote in our poll and let us know why you think men desire her so much.

Luke and Reid continued to be cute.
This week, Luke decided to take it upon himself to teach the socially slovenly doctor a thing or two about how to make friends and influence people. That lasted about two minutes. Reid could only force a smile and pretend when he was fantasizing about Luke in a nurse’s outfit.

And the search for Barbara continues...
The old enmities between Paul, Will, Gwen and Emily continued to hover and fill their time together with paranoia. There's nothing really new there. Watching Paul act like the most calm and level-headed person in town is still sort of weird though. I guess he has to anchor everything, especially since they chucked Iris into the mix. She reared her head again to tell Gwennie that she's changed and is determined to help them peel Barbara out from whichever rock she's stuck under. For mysterious reasons, Gwennie accepted this. Is it just me, or does Gwen seem slightly dumber than she used to be?

All the while, Barb remained trapped in the supply shed high on sugar and hallucinating the whole time. It was finally revealed that Iris is the one who snapped her up, in what seems like a remarkably coincidentally bit of plotting, and has ordered Barb to fork over some cash. Although, I have to wonder how Barbara, who has clearly had more than one psychotic break as a result of being trapped alone for a couple of days, really has the mental finesse to distinguish between Iris' appearance in the real world and simply being another hallucination.

James' return.
Stenbeck was back. But since Barbara's frequent life partner doesn't seem capable of even dying properly, maybe that should be no surprise. James had to make at least one return appearance before the show ends. It's not like death could stop him. This time he only returned from the dead to visit Barbara in her ongoing hallucinatory state. He was dressed as a clown the whole time, which only made it creepier. Anthony Herrera seemed to be having a lot of fun. I thought it was fun, if not quite as fun as her last big hallucination featuring Henry as Henry VIII. But with all of the things that James brought up about her and her past, why is her family so forgiving of her now? I mean, I like Barbara with Henry, but there's no reason anyone else in town should be giving her the time of day.