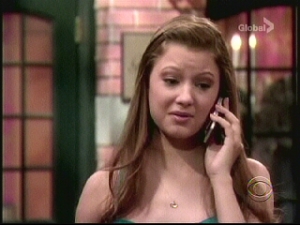 Thoughts on the week of July 19:

Things took an abrupt change of direction this week as the Barbaranapping receding into the background the rest of the town came into focus more. What continued from last week was the increased focus on Craig. Vote in our poll and let us know how well plotted you think the show has been lately.

Craig as the center of attention.
Most of the week was actually taken up by Craig. That’s not a bad thing. Once again, a substantial part of the show is being built up around him and his various relationships. It’s a far better fit than having him as Carly’s latest bedmate and is a perfect way to bring old characters back into the fold. Things have become instantly more expansive, but in a different way. While most of the characters on the canvas suck other characters reduce them through an endless play of threesomes, Craig’s wandering history actually allows for greater diversity. Things seem a little richer when he’s at play. Bringing in his many relations and lovers is already given the show some fresh oxygen after the Snyder clan sucked most of it out over the past few years. It was really nice to see Sierra again.

Lily’s progress.
Lily continued to show more backbone when dealing with her mother. Even if Lucinda has the upper hand for the moment, that is destined not to last and she seems doomed to lose out with her latest gamble for control. While I like Lily and Craig together, I’m not thrilled to see that she is already falling back into her old habits of being too reliant on a man.

Carly and Jack: bad as each other.
Jack was tripping over himself all week to play protector to Janet now that Blackthorn is in town. He even agreed to work with Dusty to essentially keep her under surveillance. Are these men so insecure that they have to play security guard for a woman who has told both of them that she doesn't actually want them? Meanwhile, Carly got super jealous of Craig once she found out Lily was involved with him. She tried to hide it, but she was clearly annoyed that she wasn't getting attention from someone. I know Oakdale must be unbearable if you're not drunk or in bed, but I thought she started her new company so she would actually get a life.

Are those tear drops in your eyes, or are you happy to see me?
Why does Molly always look like she's about to cry? Is it because she's so happy she's almost in tears, or because she feels like she's always on the brink of her life collapsing? For a long time it didn't bother me, but it's become such an ingrained part of her character at this point that it almost seems like there is nothing there but a throbbing need to weep.

Off and on.
While the search for Barbara continued, Iris suddenly materialized so that Will and Gwen would have one more thing to be freaking out about. After all, who would they be if they weren't stressed out and worried? And amidst all of that, Alison and Casey continued to grow close (again). It's been announced that they'll end up relatively happily ever after to help tie up the show. That is, symbolically at least, appropriate for the history of the Hughes family, even if it's not the most creative choice for the characters involved.

Disappearing.
Henry and Barbara's story was confined to Monday and then vanished for the rest of the week in yet another of those odd choices about pacing that the show likes to make. Henry confronted Vienna and she ran off. Then he confronted Katie and she moped a lot as she came clean about everything. No one shied away from saying she was naughty, but it was more like a shrug than a damning. Why does Katie get off so easily? Is it because she's cute as a button? Is it because her reasons for doing things are so dim-witted no one bothers to take her terrible choices seriously?

Anyway, that was my babbling for the week. Please feel free to leave your thoughts and opinions in the comments section below and remember that this is all in fun. For a sneak peek into next week, be sure to check out next week's video promo.