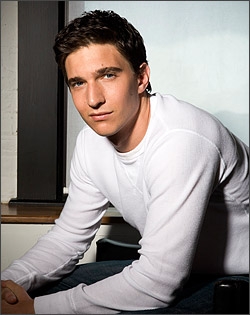 What does the future hold for "Nuke"? (CBS)

He has only been in Oakdale for a couple of months, but already Jake Silbermann, Noah, has become a fan favorite! With his handsome looks and the help of a great (and controversial!) storyline, it looks like Jake will be around for years to come.

I had the chance to chat with Jake about As The World Turns a few days ago and found out that become Oakdale’s most recent “overnight success” has been a difficult but fun road to travel.

Kristi – “Let’s talk a little bit about the show first off. Noah and Maddie seemed to hit it off right away. Then the attraction with Luke and now Noah’s father is in town. Will things get any easier for Noah?”

Jake: Well, he (Noah) definitely has a past which we’re going to learn more about. But the colonel is coming from a place that he wants to be a good father, he wants to raise Noah in “the right way”. Noah is reacting to that. His father always seems to come back (into his life) at points where Noah is ready to say “I am ready to be on my own”, and then his father will try to step in and exert his control again. So Noah will take one step forward and two steps back.”

Kristi – “What are your thoughts on the Noah/Maddie/Luke love triangle?”

Jake - "I think more than anything, Noah and Maddie were friends and their whole romance kind of took them both by surprise as well. So, I think at the heart of their relationship they have been friends and I hope they will remain friends."

Kristi - "Now that Maddie knows the truth about Noah and Luke, how will the relationship change?

Jake - "She is a very supportive person and I think she is ultimately supports them both."

Kristi - "What has been the response of fans to the storyline?"

Jake - "It's been very supportive. I've only encountered people saying how happy they are about this storyline and that it's being done really well. I'm honored to be part of such an important storyline. I didn't really know what to expect (but) everyone has been great and I've made some really good friends. As an actor, you're always excited to begin new things but don't know what to expect."

Kristi - "Where would you like the character of Noah to go in the months ahead?"

Jake - "There are so many places that this romance can and will go that I just want to see it go to a place of real emotions."

Soaps.com also had the chance to chat with Jake about other cast members and we talked about some funny moments from the set. Stay tuned, we'll have the rest of my interview with Jake in a few days!

My huge thanks go out to Jake Silbermann for taking time out of his busy schedule to chat with us. Soaps.com loves to hear news from the set. As the shooting schedule heads into the busy fall ratings period, we are looking forward to seeing a lot more of you on ATWT!

ATWT Stars: Where Are They Now...

Where Have I Seen That ATWT...