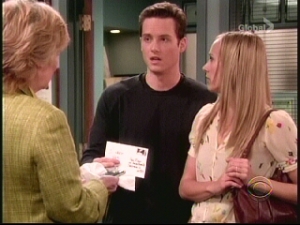 Thoughts on the week of July 12:

It was a Janet heavy week in Oakdale (but at least it was relatively Katie light). It was one of those odd, turnaround weeks they do when they stop concentrating on one or two plots exclusively and basically zoom out on the rest of the town more. That’s good and bad. The middle of the week wasn’t so strong, but the bookends of it were pretty swell.

The new guy.
Blackthorn seems like he could be kind of an interesting character, but it’s too soon to say. It’s rather iffy. He has a nice name, but that might not be enough to save him from the cliches that afflict any character who emerges from Janet’s past. Besides, this is leading to another triangle with two men vying for Janet. Once you throw Jack back into the mix with Carly trailing behind him, I’m not sure this can do anything but make a bad situation worse. Lucy coming back into the fray next week might make the whole thing even more over the top. I don’t see how constantly multiplying something that was dysfunctional at the outset is supposed to make it work better, unless they are attempting to break a record for the densest romantic mess on Daytime. It will be fascinating to see if they can actually make the whole thing consistent or if it will constantly lose focus. At least if Blackthorn and Dusty become rivals, that could create problems between him and Lucinda at Worldwide and that could have interesting repercussions.

Lily and Craig: cringe or no?
She pointed out that he's been with her mother and sister. That's pretty high on the 'ick' meter, but Lily and Craig are still proving that they can still have really good chemistry. Lily's actually rather likable in her scenes with him. But she's become rather likable in anything non-Holden related. Even though I get the impression Craig is using her to get to Carly, I still want them to have a fling. It will be fun to see how much it infuriates Lucinda, which made me realize this week that the town doesn't really have any meddling fathers, just meddling mothers. Is that a double standard?

Short and sweet.
Reid got a reason to stay. With Luke's support, he got his job back at Memorial and Bob offered him his job when he retires. Kim thought that was nuts. This whole plot development was placed in a pretty minor place, but it was a nice, refreshing bit of material on both counts. Kim and Bob were fun. Though I like Luke and Reid, I'm still afraid that the doctor is getting soft a little too easily.

The end of Henry and Vienna.
Henry ended things with Vienna. It was a unique breakup scene. We get those almost every week, after all, but this one was really raw and painful. That's the way it should have been so kudos to them for pulling it off in all its emotional ugliness. It was great to see Henry finally develop a bit of a spine as he lashed out at Vienna and Katie. They deserved it (and more). The kicker though was Katie explaining that she did what she did because she 'wasn't really paying attention'. Meanwhile, Barbara was still trapped and losing her marbles. She had a great, rather lengthy fantasy sequence about Henry being Henry VIII. Vote in our poll and let us know how you feel about the fantasy life of Oakdale.