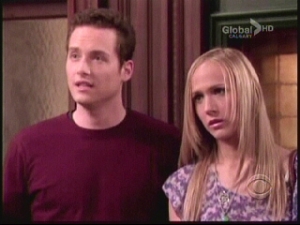 Thoughts on the week of July 5:

After last week’s highly concentrated episodes, this week’s spread a little more evenly over the town and, for the most part, it actually worked out quite well. The fact that only one of the show’s many romantic triangle and squares had much airplay was a big part of why things actually went well. While last week was all buildup, this week was all fallout, but a slow burning kind of fallout that will likely spill out for weeks.

The wedding and miscarriage.
The wedding continued, which may not have been a happy occasion for Henry but it was enjoyable for the audience. But while the awkward wedding left everyone expecting an interruption, it never came. Barbara was trapped the whole time. Barbara began losing her mind while stuck in the warehouse. Although being trapped in there for a few days didn’t seem to affect her hair, the mind underneath wore thin and she imagined that the clown she was stuck with was Henry. It was a neat idea, but I don’t think it really worked that well. But it was fitting, given that so much effort has been made to reinvent her as a kind of tragicomic heroine, part romantic, part cynic, part fool. Somewhat more perplexing was the timeline for the whole thing and how her children were instantly flocking to find her.

Vienna pushed her plan in a radically unpleasant direction. Since her new husband was about to find out that her pregnancy was fake, she faked a miscarriage. Watching Henry think he was losing another baby was painful. Watching her lie and cover it up was even more so. There used to be an even playing ground of charm and moral crapulence between Henry, Vienna, Katie and Brad, but that’s all gone now. Finally, Katie just blurted out the truth to him.

The Katie complex.
Katie tried to push Chris away. He doesn’t know how to commit to anything anymore, but he decided he wanted a life with her. That makes sense since she doesn’t know how to commit to anything either. Kim had to explain women to Chris, which was a great scene for her, and it finally made him look stupid enough to want to be involved with Katie in the first place. Finally this relationship makes sense.

Running away to be together.
Parker made another attempt to get Liberty to run away with him. I’m not sure why he thinks going somewhere full of stimuli is going to make him more exciting than being stuck where there isn’t much to choose from. Anyway, she and her flattering new haircut weren’t about to go. She and Gabriel continued their awkward courtship. He got arrested again for trying to gamble his way into a college fund for her. He really looks like a more crude version of Craig all the time. I have to admit I’m more interested in Faith and Parker, basically because, to a large degree, they’ve been written as a kind of distorted mirror to what Carly and Jack used to be. It’s just been stripped of the romanticism that was layed on with a trowel for the supercouple and been re-presented almost comically. What do you think this summer’s big romance will be?

Will and Gwen returned, full of worry about Barbara. Watching Will with 'zen' Paul was great. Watching Gwen look completely perplexed about seeing Alison and Casey together again was also nice.

Lucinda loses it.
Lucinda is becoming slightly more disturbing than usual. Although she's always been manipulative and vindictive, it's starting to feel uncomfortable. Enlisting an old business foe so she can help her destroy her daughter's business and pushing Faith around to use her body to her advantage are both pretty irksome. They are also desperate. I don't remember seeing so much desperation in her before; there was always something more, but now it comes across as an unquenchable need for control. While Lily could obviously read her mother's manipulations, she still fell for them by not realizing just how far her mother would go, how devious she can be. The situation almost made Carly look incredibly dumb considering how she was falling over herself for a deal that was such a blatant scam. I guess the vodka really did kill most of her brain. After that bout of stupidity, she and Jack talked about how they should talk about talking. Everything they do at this point is already at least one remove from reality and trapped in a haze of their own myths about themselves.

On the bright side.
I actually like the prospect of Craig and Lily together. Then again, I like Craig with lots of women.