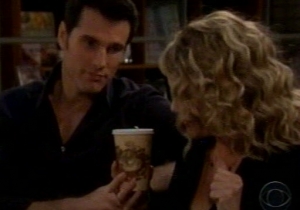 Who will Brad choose? (Soaps.com)

A couple of days ago, I spoke with Austin Peck about the upcoming Soap Cruise (by the way, there is still time to sign up and sail away with your favorite stars. Find out more here) and we got a little sidetracked talking about his current storyline on As The World Turns and the love quadrangle involving Brad, Carly, Jack and Katie.

Austin says there are a few surprises on the way for his alter-ego Brad Snyder.

Austin Peck – “Brad’s a good guy but he’s human. He does have a very selfish side. (But) He is such a pleasure for me to play after Austin Reed on Days – he was written so archaic and so good that he couldn’t know anything. Sometimes I just felt like, ‘He’s so dumb!’.”

Kristi – “Our readers what to know – is Brad really trying to get over Katie or is he just trying a subtler way of winning her over?”

Austin Peck – “I think it’s both. I think that Brad has been living a certain way for so long that he really has fallen in love with Katie but to what extent he really doesn’t know. He can’t commit to loving her. . .He has a lot of pride to a certain degree and he’s not willing to fully commit his heart to something that isn’t really there for him.”

Kristi – “Do you think Katie is the right girl for Brad?”

Austin - (laughing) "What do you think?"

Kristi - "Okay, we'll just move on. Where is Brad heading in the next few months?"

Austin - "There are some things with Carly that will sidetrack him and there are some of those old habits. . .I think coming up soon he'll really start to reveal more about his heart and what he really cares about."

But will that reveal help place "Brad" as part of the new super-couple of Brad and Katie or Brad and Carly?

Here are a few comments from the developing "Brad and Carly" fans:

Carly4Ever said - "I would love the writers to pursue something with him and Carly. Jack and Katie will both be red with envy and so be it, they deserve each other at the. . .At the moment Brad is the best person for Carly and I hope he remains that way for a very long time."

HappyToChat said, "I finally think it's time Carly was allowed to be with someone who loved her for who she is. I think Brad could be that person."

And here is what a few "Brad and Katie" fans have to say:

Jlynn said, "I hope if Brad and Katie get together, maybe they'll be nice and stable and we can see something healthy there play out."

PinkDaisys said, "I really want Jack and Katie to stay together, looks like she may have someone there to help her fight Carly...and if something should happen (knock on wood that it doesn't) to break Jack and Katie up, at least she'll have someone who cares about her to fall back on."

So, what do you fans think? Are Brad and Carly the new, hot couple? Or is it Brad and Katie all the way? We want to know, so comment below or create your own thread in our message boards!

And, huge thanks go out to Austin Peck for speaking to me, not only about the Soap Cruise, but also about current events in Oakdale. We love hearing news from the set. As the shooting schedule heads into the busy fall ratings period, we are looking forward to seeing a lot more of you on ATWT!

Sail Away with Austin Peck!

ATWT Stars: Where Are They Now...