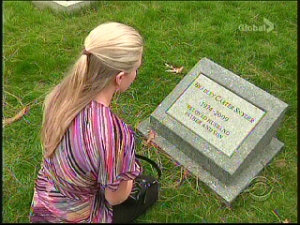 Thoughts on the week of June 28:

After a couple of sloppy weeks, things really pulled together this time with a series of well focused, well paced and expertly well played episodes. It was surprising given the fact that the entire week basically shoved the stories that have been dominating storytime for the last month or so on the backburner and put most of the plots getting short shrift at front and center. No Carjack, no Dustjacket, no Craig, no moping Molly. Things felt fresh.

Tuesday’s show was a real standout.
It was Meg’s goodbye before she was sent off to a madhouse near Washington for drugging herself and trying to shoot Emily. The killing failed because Paul loaded blanks into the gun. He’s been playing all the women in his life off against each other for awhile. Amazingly, they all seemed to forgive him while barely batting an eyelash. For Meg’s finale, instead of giving a blow out, they crafted a finely nuanced show. Everything, good and bad about Paul and Meg’s relationship was put out there and you could get a really clear sense of how they have changed each other and why. Even though I was never a great PEG fan, I was still really touched by their scenes together, although it didn’t make up for the fact that this whole plot has been written pretty shoddily up till now.

The double life of Babs.
One of the other things that was blatant this week was just how much Barbara is written like she has a split personality. She can sway with ease from being an utterly deranged and vindictive person with Emily and her son to being nearly fragile with Henry. It sheds a lot of light on both situations, and neither direction makes her look better. But it does make her character much richer and she’s been playing it to the hilt. I do kind of wish she had a better nemesis than Vienna though. Something about fight scenes with her just falls flat. Vienna’s scenes pushing Henry and Katie around weren’t much better. He was looking pretty pathetic all week. I know Henry has always been a coward, and that’s part of his charm in a weird way, but there are times where it almost makes me cringe and this week was one of those times. His scenes with Paul were great fun though.

The ghost of Brad.
Although he didn't make a re-appearance, people kept talking to him and he was used for an excuse for just about anything. Oakdale's most unlikely saint proved to be Katie's rallying cry for attempting to guilt Henry into marrying the woman she knows is faking a pregnancy to get him down the aisle. Now that's really honoring a dead man's memory. Katie, Katie, Katie... At least she finally admitted that she has to get a life, but which poor soul will be sharing it with her?

The periphery.
Luke and Reid played another round in their flirtation with Luke going to bat for Reid with Mona. Reid threatened to leave but it didn't take much to talk him into staying. Watching him stroll into Lily's, snag Luke's glass and drink out of it managed to be both intimate and funny. Bob and Kim were also being intimate and funny this week as they attended Henry and Vienna's wedding at Al's. To makes sure it was a classy event, the man performing the ceremony dropped in between "Star Trek" conventions still wearing most of his costume. All nice touches. Vote in our poll and let us know which recent Oakdale wedding was the best.

The Emmys.
The big news off-screen was that while the show has wrapped shooting and is shutting everything down, they still had something to celebrate. They took home several acting honors at this year's Daytime Emmy Awards in Las Vegas. Michael Park (Jack Snyder), Julie Pinson (Janet Ciccone) and Maura West (Carly Tenney) all took home their hard earned prizes. However, the show received pretty short shrift when it came to recognizing its legacy. They had a one minute video tribute which barely skimmed the surface of much of anything, let alone why the show has been on the air for decades. More time was spent on Regis Philbin's less than impressive jokes. It's not like the show couldn't have kicked out a tribute. They did for "American Bandstand" and Dick Clarke after all. But what fans got instead was kind of a kick in the teeth. You can see the Extended Tribute here.

As The World Turns Video Promo: The...