ATWT Stars: Where Are They Now (UPDATED!!) 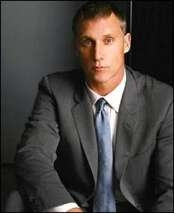 Shamika Cotton to star in a film! (Credit - IMDB)

Actors and actresses come and go on our favorite soaps, but they are never forgotten. Recently I took a look in the vault of actors who left As The World Turns and found out several of our faves have gone on to become huge stars post-Oakdale. Read on to find out what your favorite former soap stars have been up to in recent years.

Hunt Block, ex-Craig, is returning to daytime television! No, he isn’t returning to Oakdale, but Soaps.com has learned that Hunt Block will begin playing a new role, FBI Agent Lee Ramsey on OLTL. You can read more about his new role here.

Shamika Cotton, ex-Dr. Rourke, has been quite busy since leaving Oakdale. In 2006 she starred in several episodes of the television serious “The Wire”. She is also slated to star in a late-2007 film release called “Stream”. She plays young Jodi in the sci-fi flick (Whoopi Goldberg plays adult Jodi). We’ll keep you updated on the film’s release!

Zach Roerig, ex-Casey, has finished filming a new movie called “Dear Me”. The movie centers around a young woman who tells all in her blog. He is also a regular on OLTL.

Ben Hendrickson, ex-Det. Hal Munson, passed away in July 2006 from a self-inflicted gun shot wound. Readers who want to know more about this can read on here.

Bailey Chase, ex-Chris, has moved to cable network TNT, playing opposite Holly Hunter on Saving Grace! And this fall, you just might catch him on Ugly Betty. We’ll keep you updated on Bailey talks to return for Season 2 of that show.

Annie Parisse, ex-Julia Snyder, left Oakdale for the crime-ridden streets of New York City and the role of Alexandra Borgia on “Law & Order”. She has since moved on to movie roles and has three films set for release. “Blackbird” which released in 2007, “First Person Singular” which is currently in post-production and “Definitely, Maybe” set for release in 2008.

Napiera Danielle Groves, ex-Bonnie, left Oakdale in 2004 for the bright lights of Hollywood. Since leaving she has appeared on television shows like “How I Met Your Mother”, “Zoey 101” and “All of Us”. And earlier this year starred in the film “Redrum” as Michelle.

And let’s not forget a few “golden oldie” stars (no, they aren’t really old). Whatever happened to our favorite Oakdale characters from the 1980s and 1990s? I found out what a few have been up to.

Brian Bloom, ex-Dusty, has appeared in many television shows and movies since leaving As The World Turns in 1988. From voice over work (he voiced three characters in the PlayStation 2 "Jak 3" game and 1 character in the recent Fantastic Four game release) to dramas and sit-coms, Brian has done it all. Most recently he played Allan James in the series "Drive", Agent Baker in the 2006 movie release "Smokin' Aces" and played Roger in the 2006 movie "Terminal" with Tom Hanks.

Some of you may not remember that R&B superstar Lauryn Hill got her start in Oakdale. She played Kira Johnson in 1991. Since moving on from ATWT Lauryn has concentrated mostly on her music. She has several hits with the 90s band "The Fugees" before breaking out on her own. In addition to her own albums, Lauryn has written songs for several movie soundtracks including "Divine Secrets of the Ya-Ya Sisterhood". She earned two Grammy's in 1996.

Since leaving Oakdale in 1991, Ming Na, ex-Lien Hughes, has become a huge star in Hollywood. She played Deb/Jing-Mai on several seasons of the drama "ER" and was the voice of Mulan in the movie Mulan II. In 2006, she played a small role in the "George Lopez" show and appeared in six episodes of the drama "Vanished".

And let's not forget about Steven Weber, ex-Kevin Gibson. Since leaving ATWT in 1986, Steven has become a regular on several hit television shows. In the 1990s, he starred on "Wings" as Brian Hackett and in 2000 was cast as Jack Nagle on "Cursed". More recently he starred in "Studio 60 on the Sunset Strip" and in currently working on two films - "Farmhouse" which is in pre-production and "More of Me", a made-for-tv movie that is currently filming.