Annie locks Greenlee in an elevator; Kendall and Ryan argue about how best to deal with the situation. Ava and Di work on a modeling plan. Babe learns JR's secret.

JR runs into Amanda at confusion. She tells him to give her the $500,000 - or leave! JR tells her he doesn't have it. Jamie and Babe walk in and Amanda seats them. Jamie asks about JR's recent "business" trip. JR isn't sure how to answer and turns the conversation to little Adam. JR tells them that Zach has taken over Chandler and that Adam needs $100 million; Amanda makes him tell the truth and JR comes clean with the kidnapping plot. Babe gets worried and Amanda tells her that little A isn't in any danger because JR set the whole thing up. Babe can't believe and storms off. Amanda follows. Before Jamie can say anything, JR tells him to put up $100 million or shut up! He tells Jamie exactly what went on with the kidnapping plot, Zach and his father. Jamie surprises JR by siding with him against Zach. But, he tells JR that he won't bail them out. "I will buy you a cup of coffee, though," he says. 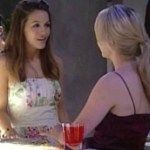 At the bar, Amanda explains that JR started the kidnapping plot but it turned bad very quickly. Babe, angry because JR thought up the plot at all, can't believe his actions. Amanda explains that she understands why JR did what he did, shocking Babe. She realizes that Amanda isn't just defending a friend - she is defending her boyfriend! Amanda swears they aren't dating, that they are just friends. Babe tells her it is okay to see JR but warns Amanda that JR isn't a good choice. Amanda agrees, telling Babe that she knows everything there is to know about JR. The girls return to Jamie and JR's table. Jamie tells them about Babe's recent GED test and JR congratulates her.

Krystal asks Adam why he is at The Comeback. Colby runs through but won't talk to Adam because she is too busy. Adam takes a seat at the bar before telling Krystal that she won't be getting half of anything. She tells him that she already knows because Colby filled her in, and she is confident that she will get her half of the Chandler fortune. He tells her he would have something to work with if she just would have kept her Chandler shares. Krystal can't believe he is blaming his problems on her! Adam orders a beer but Krystal can't get the taps to work. Adam gives her instruction and she gets it to work. Krystal hands Adam the beer. Across the room, Colby delivers some food, turns and seeing Adam and Krystal acting very chummy. She tells Adam to stop drinking because of her heart and he tells her not to worry. Colby asks him to watch her work and Adam agrees. Krystal tells him Colby isn't just excited to see him - she is excited to see them together again! She tells him about her friendship with Derek; Adam doesn't like it but then pretends not to care. Krystal sees through his act, though, and tells him to stand by her with Colby, so the girl knows they are really and truly over this time. "Colby has her heart set on us being a family again," Krystal says. Adam offers to talk to the girl but Krystal doesn't think that is enough. She tells Adam that he shouldn't keep showing up at The Comeback because it gives Colby hope. Adam agrees but doesn't like the idea. Krystal tells him that she'll take an IOU on her half of the fortune and walks away. Adam is heartbroken.

At the yacht club, Lily tells Jonathan about Ava's latest impersonation. She explains that Ava went as a favor to her! Lily realizes that Jonathan isn't thrilled with the latest impersonation and she wonders why. When Jonathan won't say anything Lily begins deducting and soon gets really nervous. She thinks Ava might be a good match for Jonathan and that makes her nervous! She pulls out earbuds to block out the noise and her own thoughts about Jonathan and Ava. She calms down and tries to make Jonathan understand how different they are now. He assures her that he already knows they can't go back to the way things were. He offers to pay for dinner but Lily would rather split the bill. Josh walks in, surprised to see them together. Josh focuses on Lily and Jonathan makes a quick escape. Josh is confused.

At Fusion, Kendall is busy trying to figure out what Ava is trying to pull while Annie and Greenlee continue their fight. Ava runs out and Kendall can't catch up. Annie rages that Greenlee hasn't changed one bit - that she is the same manipulative person she's always been. Greenlee suggests that Annie is simply afraid she'll lose Ryan - and with good reason! "We have a connection," she tells Ryan. He tells her she is wrong but Greenlee won't listen. Annie believes him, though and tells Greenlee so. Greenlee storms out. Kendall can't stop her but Annie follows and locks them in an elevator together!

Ava walks in to conFusion and orders a drink. Del turns her away, saying he won't serve underage customers. Di walks up, annoyed that Ava tried another Lily impersonation. Ava tells her that she and Lily agreed on the impersonation but Di can't believe she did it. Ava goes on for a bit and Di decides to help her out. She calls the photographer! The photographer comes down to talk to both of them and tells Di that Ava doesn't know how to model. Di asks him to take a chance on Ava as Ava rather than Ava pretending to be Lily. The photographer agrees to take a few shots. Ava is really nervous but Di sets her at ease with inconsequential questions about Ava's likes and dislikes. The photographer gets to work, taking shot after shot. The photographer finishes. Di likes the shots and she and Ava go upstairs to find Kendall.

In the elevator, Greenlee tells Annie that she is claustrophobic but Annie doesn't care because even since Greenlee has come back she feels claustrophobic, too! Upset, Greenlee realizes that Ryan was focused on Annie the entire time they were arguing in the office. Greenlee makes a move for the elevator control pad but Annie blocks her every move. She makes Greenlee keep talking. She finally admits that Ryan doesn't love her any more. "There is no room in his heart because you're there," she says, crying and not understanding how he could have moved on. Annie isn't ready to set her free, but when Greenlee gets even more manic she opens the elevator door.

Di and Ava find Kendall but she immediately rejects the pictures. She tells Ava the shots are good but aren't even close to what they are looking for. Ava leaves. Jonathan finds her at Wildwind, angry that she tried to set him up with Lily. He sees the pictures and realizes that Ava modeled as herself. He can't hold back his feelings and kisses her!

Back in the office Kendall tells Ryan not to worry about Annie because she can take care of herself. Ryan is worried, though. He also wonders why Kendall keeps trying to make things alright for Greens. "Because I love her, just like you do," she says. Ryan says he is tired of all the drama surrounding Greenlee, telling Kendall that he doesn't have the energy to deal with the other woman. He asks her to back off trying to make Greens and Annie friends because it is only making things worse for all of them. Kendall doesn't agree. She thinks Annie and Greenlee can become friends the way Kendall and Greenlee are building a friendship. Just then, Greenlee rushes out of the elevator, gulping in air and grabbing the wall. Annie follows her out and goes immediately to Ryan. Kendall tries to comfort Greenlee but she pulls away, telling Kendall to back off. "I want to forget. All of it," she says. Kendall leaves her alone. Greens walks away, telling herself she will find a way to un-love Ryan. Kendall returns to Annie, asking what happened. Annie tells her what Greens said in the elevator. Ryan asks Kendall to leave them for a while and she does, upset that she can't help Greenlee and upset that Annie isn't confiding in her. Ryan tries to take Annie in his arms but she pulls away and goes into the lounge. Ryan follows. Annie is hurt, mostly by her own feelings toward Greenlee because she didn't buy a minute of Greenlee's meltdown in the elevator. She doesn't care about Greenlee's feelings and that scares her a little. She realizes that all the drama isn't about Ryan and Greenlee, it is about Ryan and her. She touches his face, kisses him and tells him things are going to be okay. "More than okay," Ryan says, kissing her back. He asks her to come home with him. They leave the office.

Greenlee winds up at the yacht club and orders a tea. She doesn't think she can handle anything harder. Josh joins her, immediately asking about Ryan. Greenlee doesn't want to talk about it. Josh realizes something is wrong and pulls Greenlee away from her table with his own thoughts on how to make things okay for her.

Kendall wonders if Zach is changing his mind about the Chandlers; Lily sees Ava and Jonathan kisses. Josh tries to make Greenlee forget about Ryan.

Adam and JR - Together Again!