Zach and Kendall get the "party" off to a roaring start. JR and Babe come to an agreement, but can it last? Julia has a proposition for Annie.

Zarf/Zoe arrives at Bianca's to give back Miranda's doll. It was a present for Miranda from Erica and she doesn't feel right keeping it. Bianca tries to give the doll back, but Zarf/Zoe won't accept it. If it would be all right, though, she would like to come and visit from time to time. Maggie comes in, annoyed that Zarf is there. She leaves, and Maggie goes on the attack. Just what does Bianca think is happening with the man? She is letting "him" take advantage of her! Maggie storms out, leaving Bianca alone. Picking up the phone, Bianca calls Zoe. Would she come back upstairs? Zoe returns and mentions meeting Maggie at the park. What happened? She tells Bianca about their converstaion.

At the Chandler mansion, JR lets Babe in to Dixie's room, but he isn't ready to forgive her. He still doesn't know what to do. Babe tells JR it's his call, he has to do what he feels is right. He is her family. Her priority. The words only make JR more angry. "Why did you kiss Josh on New Year's Eve?" he asks bluntly. Babe tells JR that Josh kissed her during the countdown and then she told him to leave her alone. JR doesn't buy it. Tad arrives downstairs and Krystal tries to head Tad off before he can see Babe. Their raised voices carry upstairs. Tad tells them Babe will be safer at the party than at the mansion. JR and Babe enter and listen to Tad's explanation for the party. JR tells Tad he'll go but Babe should stay home. Babe won't stay behind; she's going, for Dixie and the other girls who have already died. Touched, JR steps toward Babe. "You'll be safe tonight," he says. "I'll make sure of it." A little while later, alone at the manse, Krystal and Adam commiserate with one another. Babe shouldn't have gone to the party. She should have stayed safe at home. Adam stuns Krystal when he tells her he underestimated Babe -she may be very good for JR!

At Wildwind, Dell, Di and Aidan get ready for the party. Julia and Amanda want to go to. Jamie enters - telling Julia she isn't invited! Kathy needs Julia to stay home; she can't lose another mother so quickly. Kathy comes in with a broken doll. Her mom could have fixed it but now no one can! Jamie talks to the little girl about Dixie. He will never have another of Dixie's chocolate chip cookies, but he has Julia and she makes great sugar cookies. Maybe Kathy could give Julia a chance to fix her doll? The little girl agrees and Jamie leaves them alone. In the hall, Jonathan arrives. He is going to the party, too!

At the park Annie and Emma run into Julia and Kathy. The little girls go off to play, and Annie asks how Julia got Kathy. Did she steal someone else's medical records? Julia explains about Linda and then apologizes for taking Emma from Annie. She saw a chance to even the score with Greg and took it. Ready to move on, Annie tells Julia to leave the past in the past. As the two watch the girls, Annie asks if Julia knows of any apartments for rent. Julia suggests Wildwind. There is plenty of room, Kathy and Emma have bonded. Annie is interested, if the offer is for real.

Zach and Kendall arrive at the casino, both are nervous about the night ahead but are ready to get started. Zach remembers the night his mother died - she seemed happy. Zach takes Kendall in his arms. He can't lose her! Ryan and Josh arrive at the same time. Josh is angry and Kendall leads him from the balcony to explain her reasons for the party. Still on the balcony, Ryan shows Zach the note from the killer. The Satin Slayer is watching them. All of the time! Is Zach ready for whatever happens tonight? Anxious, Zach asks Ryan for a favor. Can he help keep Kendall safe? Of course. Meanwhile, inside the ballroom, Kendall tells Josh to get on board or leave. She has to do this. Palmer and Opal arrive as Zach and Ryan come back inside, telling the growing crowd the real reason for the party. "Let me at the bastard," Palmer exclaims! One of the first guests to arrive is Kenny Adler. Could they be looking at the killer, Kendall and Zach wonder? A reporter comes to the door and asks Kendall why she is throwing a party. Kendall hands the reporter off to Opal to talk about Dixie. Inside the ballroom, Babe and JR seem to come to an understanding. Josh comes over, angry that JR allowed Babe to come. Jamie, JR and Babe tell Josh to leave. From across the courtyard, someone is watching the goings on. Jonathan and Amanda see Kenny and decide to keep an eye on him. Kendall gets Ryan alone, asking him why he is at the party when he is obviously still angry with her. Why isn't he with Annie and Emma? Because he cares about her, Ryan says, he is there to protect her. Kendall tells Ryan about Annie's visit to Fusion. She believes Annie is already trying to drive a wedge between them. Can he prove that Emma won't cost Spike anything? Without waiting for his answer, Kendall moves off into the crowd.

Left alone in a corner, Babe watches the party. Someone sneaks up on her and drags her out the door! It's Josh. He has kidnapped Babe to keep her safe! Through a French door, JR sees them and he and Jamie follow. In an enclosed porch, Josh tries to convince Babe that JR is setting her up; he wants her dead! Babe disagrees; JR has changed. He isn't the same old JR since his mother died. He is her life, her future. Things between she and Josh are over and he needs to back off! Josh is hurt, but tells Babe he won't stand in her way. Before he leaves, Josh asks Babe for a favor - take little Adam and JR and leave town! Babe tells Josh goodbye and they exchange a goodbye kiss, unaware that JR and Jamie are watching.

Kendall and Zach meet outside the main salon, ready to put another part of their plan into action. Kendall dresses in a replica of the dress Amelia wore the night she died. Kendall strikes a pose on the balcony and someone sneaks up behind her. "Amelia, is it you?" the stranger asks as he takes her by the shoulder!

Next time on All My Children

The police believe they have a suspect in the serial killings, and Tad demands to be let in to see him. JR has an ultimatum for Babe; Josh fears JR will try to hurt her. 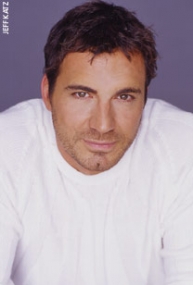