Grabbing Happiness When They Can.

Kendall stops Griffin from leaving her house to ask for his address. He reminds her she can email him and asks for updates on the Miranda Center, Cara and her boys. After she offers to give him her camera so he can send her pictures too, she takes a photo of them together. She then says one of them has to figure out how to really say goodbye. Griffin states he isn't good at saying goodbyes. She quips he's not good at saying hello either. She tells him he meant a lot to her coming into her life when he did. He calls her a real experience. She kisses him on the cheek and he leaves. 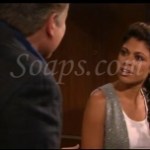 At home, a sullen Cara gets a text message from Griffin. She tells Tad her brother is leaving. Tad knows Griffin is family, but he notes he is family now too and he isn't going anywhere. As Tad consoles Cara, Ryan urgently calls for Tad's assistance. After Tad leaves, Cara looks at a photo of her and Griffin and then runs out.

Cara stops by Griffin's hotel room. Griffin explains that he texted so she couldn’t talk him out of leaving. She says she'll be fine without him, but she will miss him. She sees the camera and looks through all of Kendall's photos and teases him about them. He notes he has history there, as does she with Tad. The siblings hug goodbye.

Tad races over to Ryan's assuming the emergency has to do with David. Ryan instead says he wants Tad to marry him and Greenlee today. Tad can't believe that's the emergency and questions the impulsiveness of it. Ryan knows Greenlee is the woman for him and thinks they have to grab their happiness when they can. Tad can't argue with that. Ryan asks Tad to figure out what he's going to say about them and Tad thinks about his own wedding to Cara. Ryan leaves a message for Kendall about the wedding, as Emma walks into the room. Ryan tells his daughter they are holding a surprise wedding for Greenlee. Emma wants to help and says she will help make the best surprise wedding ever.

Madison sails into Fusion and tells Greenlee and Randi she's working on ideas for a new line. She doesn’t have one nailed down just yet, but it's right there waiting for her. Madison thinks Greenlee is looking at her like she's a flake, but Greenlee is excited she is working on new ideas and orders her to get busy. Greenlee gets a call from Emma, who, with Ryan's prompting, says she needs her to come home right now for help with her hamster. Greenlee is touched her stepdaughter called her for help and leaves. Randi hovers over Madison, who insists she's fine. She points out she has spent her whole life trying to please a man and it never turned out well. Fusion is about her and honoring her daughter. She has a new attitude and orders Randi to stop waiting for her to freak out. 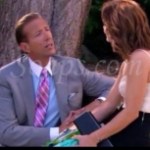 Greenlee runs into Jack in the park. She tells her father how grateful she is for what she has and thanks him for his good advice about Ryan. 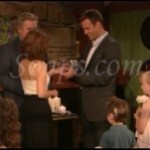 As Ryan frantically waits for Greenlee to return home, Kendall stops by and Ryan asks her to be a witness at the wedding. Ryan calls Jack to tell him he is throwing Greenlee a surprise wedding and he needs her home now. After hanging up with Jack, Ryan asks Kendall what's going on with her. She tries to blow it off, but Ryan wonders if the wedding is bringing up memories. She just says it's making her nostalgic because everyone she knows is getting what they wanted. Jack walks Greenlee home. She runs into Ryan's arms when she learns he planned a surprise wedding. The informal ceremony gets underway. As scenes from their past play out, Ryan tells Greenlee he loves her now more than ever and calls her his soulmate. He has always been deeply connected to her. Greenlee notes all the things that tried to keep them apart never could and she could never stay away. It's always been him. She's always been deeply connected to him. They exchange rings and Tad declares them husband and wife.

Amanda worries she could be pregnant.