Griffin has to leave town, Greenlee is suspicious of "Erica's" fashion sense and Marissa and JR have news. 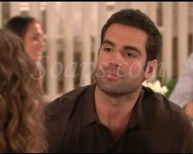 Griffin meets with Kendall and Bianca at the Yacht Club. He tells them he's leaving Pine Valley to go to Chile immediately. Once he's gone, Bianca asks her sister why she didn’t ask Griffin to stay. Kendall says it doesn't matter now because his assignment is court ordered. Bianca thinks he could get it changed and declares if she had the guts to put herself out there then Kendall should too. She tells her sister she admitted her feelings to Marissa, but it wasn't reciprocated.

At Fusion, David brings Greenlee a box of things from her office at the hospital. He states he's back in the business of saving lives and she will be astounded by what he's about to do.

David finds Griffin tying up some loose ends at the hospital. David appeals to Griffin to stay, but to no avail. David is impressed he is walking away clean, with no attachments. He says it's essential to the success of people like them. 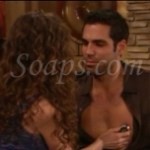 Griffin visits Kendall at home because he couldn’t leave without seeing her again. He gives Kendall her file in case her new doctor has any questions. He listens to her heart and says it sounds good. They recall their patient/doctor relationship and how they got off to a rough start. Kendall apologizes for everything that went down with Ricky and how she didn’t believe Griffin from the start. Griffin calls it water under the bridge because that's how friends roll. He jokes around about how much she will miss him. They get more serious and both admit they will miss each other. Kendall turns the tables and listens to his heart, as they continue to make lighthearted digs at each other. They share a sexually charged moment and then hug goodbye. Griffin heads to the door, but Kendall says, "Wait!"

"Erica" is followed by a reporter at the hospital. Ryan intervenes when the reporter gets too hostile. After he gets rid of the woman, Ryan expresses his concern to "Erica" that David was involved in her kidnapping. "Erica" assures him that's not the case and she knows what she's doing with David. However, she never knew he still cared so much and is obviously pleased by it. Greenlee enters as "Erica" insists she won’t be manipulated by Hayward like Greenlee was.

At home, Greenlee thinks it's weird how David seemingly got to "Erica" overnight. Ryan agrees something has changed and they need to figure out what it is. Greenlee also points out that "Erica" was wearing last season's shoes, which she would never do. Ryan doesn't exactly grasp the gravity of that evidence, but Greenlee knows it means something. She also declares she's missed them working together. Ryan leans in for a passionate kiss. Ryan tells Greenlee how much he loves her. He adds that no matter how many people try to get between them, they have to fight to stay together. She will always be by his side whether he wants her there or not. He definitely wants.

David and Jane meet up in the hospital. David warns her against getting too close to Ryan, but she assures him she's got it handled. Jane wonders if he's jealous of Ryan. He denies it and indicates he has big plans in store that go beyond ownership of the hospital. He declares no one will know what hit them. 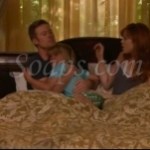 Marissa and JR wake up in bed together. Marissa thinks about Bianca's admission as JR talks about how great it is to be with her again. AJ runs in the room and asks if they are back together. JR says it's a good question and lets Marissa answer it. Marissa confirms it. AJ is thrilled and JR says that's the only birthday present he wanted. 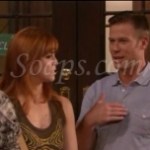 Marissa, JR and AJ run into Bianca and the girls at Krystal's. AJ excitedly tells his friends his parents are back together, as Bianca tries to look unaffected. JR goes to check on AJ, as Marissa asks if Bianca is okay because she cut the vacation short. Bianca says she's fine and in turn asks if Marissa is okay with what she admitted to her. Marissa insists she's more than okay. Bianca brings up her reunion with JR and Marissa says she's happy, but trying to be smart about it. Bianca says if Marissa is happy, then she's happy for her. JR catches Bianca before she leaves with the girls and thanks her for whatever she said to Marissa to bring her back to him. Bianca is just glad things are working out for them. She starts to give him another date idea, but he says he's got it covered from now on. Bianca walks out, but turns to longingly look at Marissa.

Ryan wants Tad to marry him and Greenlee.

Griffin is surprised Cara doesn’t ask him to stay.

Dixie dreams of her wedding to Tad.

You've Been Swashed And Buckled.

Grabbing Happiness When They Can.