Kendall's ready to move on, Madison passes out and Angie makes a decision.

Maya and Colby find Asher in the mansion listening to his iPod. They interrupt him and suggest he go outside and get some sun. Colby tells Maya to join them, but Maya has a second job interview.

Colby brings Asher to an empty Yacht Club. They discover a graduation party is being held there later and they hang out until it starts. They turn on some music and Colby starts singing, which impresses Asher. 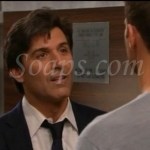 Elsewhere in the hospital, Ryan confronts David about partnering up with "Erica." He knows David has something bigger going on and assumes it has something to do with Greenlee. David says, "My house, my rules. May the best man win." Ryan calls "Erica" and leaves a message for her to call him back.

Jesse finds Angie at the hospital reading information on David's treatment plan to get her sight back. Jesse is wary of David's involvement, but Angie explains how badly she wants to see their daughter. Angie adds that once she can see again, there will be one more set of eyes on Dr. Hayward. Jesse gets a call and tells Angie he has to go. Angie meets with Frankie so they can talk with Maya about babysitting. David approaches them and Maya leaves. Frankie wants to join Angie and David's meeting, but Angie assures her son she'll be fine. After Frankie walks away, Angie tells David she wants her sight back, but she won't lose her soul to get it. David gets a little too harsh and real with her, so she slaps him. David tells her she has to take a leap of faith with him if she wants her sight back. Later, Angie tells David she's ready to start treatment as soon as possible.

Frankie finds Maya in the hall and asks if she's okay. Maya says she can't work for his mother because the emotions of giving up her baby are still to raw. Frankie tells Maya Randi rebounded from her miscarriage by being around other babies. She can't give him an answer right now and leaves.

Colby and Asher return home and invite Maya to hang out with them. Maya just wants to do her job. She walks out and takes a call begging someone not to be mad. 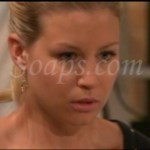 Madison freezes up during her on-camera presentation to the buyers at Fusion, as she thinks about losing her baby. Madison runs out and Greenlee takes over. Randi checks on Madison, who insists she's fine, but when she gets on the elevator, she slumps down to the floor. Randi returns to Greenlee and questions her treatment of Madison. Greenlee knows she will be judged no matter what she does and tells Randi to go home. After Randi leaves, Jack shows up with cotton candy for his daughter. They talk about her relationship with Ryan and Jack thinks she's afraid what she has will be taken away. He tells her to stop being afraid or else she will lose everything.

Jesse and Ryan meet at Ryan's place to discuss David. Ryan wonders if David had something to do with Erica going missing. He then backtracks and thinks David could have even orchestrated Greenlee's accident so he could control her when he brought her back to life. He thinks he did the same with Erica to gain control over her. Jesse doesn’t think it makes sense, but they agree to look into things and keep each other updated. Greenlee comes home as Jesse leaves. Ryan tells Greenlee he knows he's been distracted, but he won't let David hurt her anymore. Greenlee is sorry she's been so needy for his attention. He tells her she's go it now and kisses her.

Griffin follows Kendall to the park. He wonders what he said that scared her off. She explains that after her recent ordeal she forgot how to stop running and just catch her breath. She just wanted to be there in the moment on this beautiful day. He asks what she wants to do now. She challenges him to a race. After they play around, Griffin grabs her close. Just as it seems they are going to kiss, Kendall sees a disoriented Madison. They race over to her and Madison passes out in Griffin's arms. Griffin wants to take her to the hospital, but Kendall says she shouldn't have to wake up in the place where she lost her baby.

Madison wakes up at Kendall's house. Griffin tells her she's suffering from extreme exhaustion. She needs to eat and then sleep. Madison says it sounds good as long as she doesn’t wake up. Kendall assures her one day the pain will subside and the sun will shine through all the dark clouds. Madison falls asleep and has a dream that she confronts Greenlee with a gun.

Randi shares her story with Madison.