Madison freezes, Kendall runs away and Amanda is torn up with guilt. 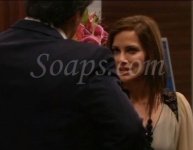 Greenlee finds David making plans at the hospital. She tells him she never would have sold the hospital to "Erica" if she new he was involved. He thought she would have been happy to be rid of the hospital because it now allows her to focus on her personal life. He says, "You do still have one don't you?" He taunts that his dark side allows him to understand her in a way Ryan never can. Once Greenlee has left, Kendall shows up to confront David. His shooting comes up and Kendall tells him she has her life back now because the man who killed Zach is behind bars. She asks David to not screw "Erica" over so they can all have a chance of working things out. Griffin joins them and asks if everything is okay. She says it depends on his mentor. Kendall leaves for work and Griffin warns David not to make him regret supporting him. David reminds his protégé he is leaving town, so why does he even care?

Ryan arrives at Fusion looking for Greenlee, but finds Madison passed out on her desk. He thinks she should get home to get some sleep, but she reminds him she is not his problem anymore. She spills coffee on the sketches she was working on. Ryan sees them and says she is more talented than he ever thought. Greenlee shows up and thanks Madison for picking up the slack for her while she's been dealing with the hospital. Ryan shoots her a worried look and she tells Madison her sketches are good and asks her to do the entire presentation. However, she suggests she go nap and shower first. Madison thanks her and runs out. Ryan tells Greenlee she is pretty amazing and points out they still work well together because she picked up on his look. Greenlee gets a call from Kendall and Ryan leaves to help with the David situation. Randi returns after finding a disheveled Madison in the park. Madison walks in and Greenlee notes she didn't freshen up. A confident Madison begins the presentation, but freezes up when she thinks about Sara.

Ryan heads to the hospital and overhears David talking to "Erica" on the phone. David thanks her for pushing through the sale and says they are even now.

Griffin joins Kendall at the Yacht Club. They talk about David and she tells him she knows she has to let go of the past because nothing will bring Zach back. He asks if they are on the Miranda Center clock or their own time. She wonders if it matters. He moves in close to her, brushing her face and arm with his hand. Kendall gets uncomfortable and leaves.

Marissa interrupts JR at Krystal's, as he remembers his tryst with Amanda. They sit together and Bianca walks in. She joins them and they discuss "Erica" teaming up with David over the hospital. JR makes some calls for her, as Bianca tells Marissa she and the girls are going to a spa. Marissa asks if she and AJ can tag along. JR returns and Marissa fills him in on the trip. Bianca tells her JR already had plans to take her and AJ to the Grand Canyon. JR plays along and Bianca leaves. JR asks Marissa if she feels like going and she responds, "Of course I do."

Tad walks into his living room to find Cara going through his mother's recipe book. He knows she's worried about Jake and he says he is too. She encourages him to go check on his brother. Once he's gone, Opal comes home and tells her step daughter that she has brought a lot to the family.

At home, Jake admits to Amanda he almost slept with Cara, but they stopped before things got too far. Amanda slaps him. He says he deserved that and apologizes for what he did. He wants them to go away together and work things out, but she just leaves for work. Later, Tad drops in and Jake tells his brother what happened. Tad tries to reassure Jake everything will work out, but Jake is scared Amanda is gone for good.

Amanda hightails it over to JR's house to tell him she wants to confess to Jake. He implores her to keep it a secret, as Marissa shows up. She wonders what's wrong and they cover. After Marissa has left, Jake arrives. After some uncomfortable discussion about Amanda working too hard, she leaves with Jake. Marissa returns and JR tells her he has to postpone their trip.

Marissa returns to Bianca at Krystal's and tells her friend she and AJ are joining them on their trip after all.

Asher is in awe of Colby.

Kendall finds a disoriented Madison in the park.

It's Good To Be Home.