It’s Good To Be Home.

News of David and "Erica's" partnership speads, Jake wants to tell Amanda the truth, and Angie is the lone defender of David.

"Erica" continues to read from her index cards at the press conference from home, introducing David as her partner at the hospital. Jack stews off to the side. Once alone, Jack thinks "Erica" has suffered mental trauma and wants to get her help. She counters that she's just taking a business risk. Jack can't understand it and says he will find a way to break her contract with David. She says he will do no such thing, but Caleb shows up and says she can't do anything without her partner. "Erica" says she just made a fantastic deal on a prime piece of property, using her own money. She takes offense and declares she will do what she likes and storms out. Caleb smiles and tells Jack she's right. He calls her smart, determined and unpredictable.

Griffin walks into the Martin home looking to celebrate his freedom. However, Tad and Cara just watched "Erica" and David's press conference. Cara wants to go to Jake to make sure he doesn’t go after David. Tad talks her down and he goes to his brother in her place. Griffin asks Cara if she knows how much her husband cares about her.

Amanda's on edge at home as Jake asks where she was. She says she was working. He knows he put the distance between them and wants to work it out. He gets a call from Tad, who tells him about David and "Erica." Jake is rattled and tells Amanda he has to find out what's going on. She understands, but asks him to stay away from David. He tells her nothing is more important than them and leaves. 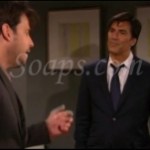 Frankie and Angie watch the press conference from the hospital. Frankie is outraged, but Angie states the man has performed miracles. Frankie is concerned, but Angie just wants to go get some comfort food at Krystal's. After Angie leaves, Jake shows up, as does David, who smugly says it's good to be home. Frankie walks away and Tad enters as Jake and David have words. David tells the Martin brothers he has board approval so they can't do anything about it. Cara joins the crowd and David needles Tad about his wife being more concerned about his brother. David then gets in some digs about Amanda. Jake stands up and takes off his jacket ready to fight. Cara and Tad intervene and Jake backs down. David gets in more jabs and then leaves. Tad asks Jake to let him take care of David because he could get fired. Tad leaves to call Joe to see if he can do anything about this nightmare.

Angie sits at a table with Krystal at the restaurant and defends David because he could help her see again. Krystal is leery of trusting David, Angie has to risk the chance if it means seeing her husband and daughter. Amanda walks in and takes Krystal's seat when she goes to the bar. Amanda cries and asks Angie to tell her it will all be okay. Angie asks if she still loves Jake. Amanda responds, with everything that she has. Angie urges her to tell that to Jake. Alone at the table, Amanda recalls her night with JR and runs out crying. Caleb and Jack show up. Krystal talks with Jack alone and quits her job with him, because, among other things, he will be dealing with David. Jack assures her his door is always open if she changes her mind. Jack leaves and Caleb offers her a job. She appreciates it, but turns him down.

Back at the hospital, Cara tells Jake Tad is right. The hospital and his family need him so he can't let David force him out. Jake says focusing on David is easier than facing his wife. He hates that Amanda looks at him like she doesn't trust him. Amanda arrives, as Tad returns telling them the vote by the board was legit. 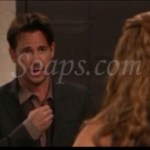 Jake and Amanda go home, where he says there is something he has been keeping from her. She says she knows he slept with Cara. He declares, "No. I didn't."

Jack encounters "Erica" at the Yacht Club bar. She insists she is drinking sparkling wine. "Erica" tells Jack he thinks too much and suggests he turn his brain off. She crawls into his arms and says, "There. That's more exciting. Isn't it?"

Griffin walks into the employee area of the hospital. He tells David he knows he has the talent to be there, but if he messes with Cara to get at Jake, he will bust him up. David assures him they are on the same side and offers him a job again. Griffin says he is gone once his community service is up. David counters he can make amazing things happen. He's already proved that.

Greenlee asks Madison to give a presentation.

Marissa wants to go on a trip with Bianca.