Amanda and JR find comfort in each other, Jane and David make their move and Marissa is ready to trust JR. 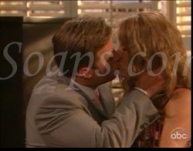 Amanda and JR commiserate over their relationships in the Yacht Club hotel room. She calls them a couple of screw-ups, but says they still deserve to be loved. They look into each other's eyes and start to kiss. Amanda breaks away, but talk of Jake and Cara pulls her back in. They kiss again and start to undress on the bed. Amanda cries after they have sex. He tells her there's no reason to feel bad because it was two friends who needed each other. She thought she would feel better, but Jake is the only one who can do that for her. Amanda calls herself a total failure. JR retorts that what happened doesn’t change how amazing she is. JR assures her what happened won't go further than the room.

Marissa ponders her future with JR with Bianca at Krystal's. Bianca suggests she just follow her heart. After Bianca has left, Marissa talks to Krystal, who thinks JR has changed. Marissa is surprised to hear this and wonders if she's just a coward. She thinks maybe it's time for her to trust him.

JR returns to the mansion to find Marissa, who apologizes for running away from him in the park. She says she was wrong and hugs a guilty looking JR. 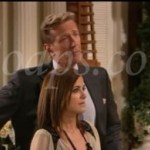 Greenlee finds Jack and David bickering at the Yacht Club. David insists he and Erica are just reconnecting, but Jack and Greenlee know David wants something. After David leaves, Greenlee tells Jack she's thrilled to be selling the hospital because it's her last connection to her ex-husband.

Jake tells Angie at the hospital that he might have blown it with Amanda because he can't find her. He admits he's keeping something from his wife and Angie urges him to tell Amanda the truth. David shows up and talks to Angie about her treatment. Angie says they'll talk later and leaves. David hangs back and tells Jake he saw Amanda tossing back martinis. Jake tells him it's his hospital and he wants him out. Jake adds, even if he does get his medical license back, he will never work at PVH. David just smirks.

Jake heads home and finds Opal watching Trevor. He asks her if she could watch Trevor for a few days so he and Amanda can go away on a romantic getaway. Opal would be happy to help. As Jake makes calls for a romantic surprise for Amanda, she walks in the door. Jake asks where she's been.

Jane asks Erica through the mirror how she has gotten through all the tragedy in her life without being bitter. Erica realizes Jane is talking about her own tragedy and tells her she knows about the accident. Jane doesn't want to talk about it and declares that Erica's life is hers now. She has to get back to it and make her big power play. Erica asks what's going on and tells her if the power play involves David it will blow up in her face. Jane turns off the speaker and sees Ben. She lashes out at him for telling Erica about the accident. He apologizes, but she remains curt and says they will deal with it later.

Jane visits David at the Yacht Club hotel room. She's too stressed from all the pressure, so he hands her a beer. She tells him the sale of the hospital is going through, but she worries she won't have all the answers people will ask once she makes the big announcement about him. He points out she is pretending to be Erica Kane and doing it pretty well. She was thinking of bringing him on in about year, but he says it needs to be done now. He assures her he has it all under control.

"Erica" shows up at the Yacht Club to sign the papers for the sale of the hospital with Greenlee. Jack questions her about David's involvement first. She states that David is very knowledgeable on the hospital, but Jack doesn't want her involved with him. "Erica" says it's just business, which is a win win for everyone. Greenlee aggress and they sign on the dotted line, as David watches from the wings. 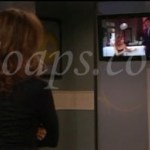 Jack and "Erica" return home, where she tells him there is going to be a news conference. Jack is worried about her, but she assures him she's got in under control. The cameras show up and speaking from index cards, "Erica" announces that she is the new owner of PVH. She then brings David on camera. Ben sets it up so the real Erica can watch the broadcast in shock.

Don't Talk About My Former Life...

It's Good To Be Home.